Hello and a very Happy New Year to you all!

Firstly I would like to apologise for my absence from Blogland!

I knew that it had been a while since I last posted, but I didn't realise just how long it had been until looked back at my previous post and saw that it was in mid November! How these last few months have flown by!
The reason for my absence has been down to a very crazy few months! You may remember that a few posts back I mentioned that were in the middle of a property sale. Well since the sale has finally gone through! Things got a little hairy when we got a little too close for comfort to the repossession date that was held by the previous owner, but we got there in the end and finally received the keys on the 26th November 2014.

Below you can see the sight that greeted us when we walked into the kitchen of our new property. The lovely previous owner had left us a little moving in card and gifts! I was so touched by this that it made me well up a bit, especially since we had never even met or spoken her at this point! 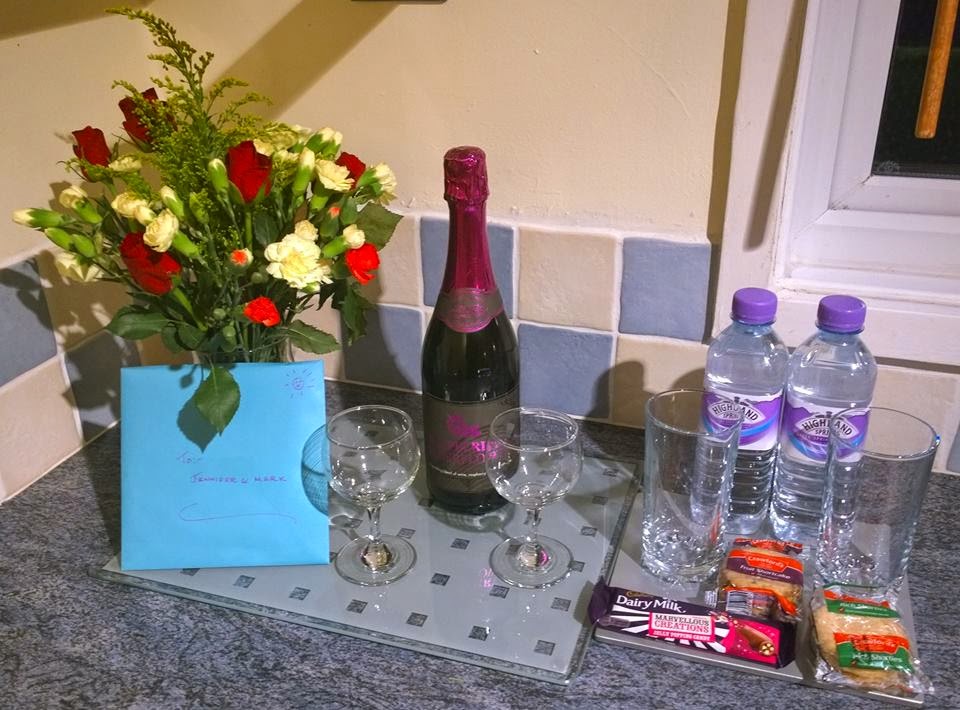 After getting the keys, as much as we wanted to we didn't move in straight away due to the re-decorating that needed to be done, and since we has our old flat lease until the 12th Feb 2015 we thought that it would be much easier to paint before moving all of our stuff in.

The main priority was getting the main bedroom painted as it had purple padded wallpaper and everything else in the room was painted purple too; including the skirting boards, door and window frames, and even by phone  the phone point! (I will put up photos to show you at some point if I can, but they are all on my phone which has currently died, but that is a whole different matter!) So after all the time consuming process of stripping the wallpaper had commenced we set about deciding what colour to paint  the bedroom, and after much deliberation and nine tester pots later we ended up going with Farrow and Ball Skylight which is like a Grey/Blue colour.

After the main bedroom was completed I set about painting the second bedroom which was a lovely combination of yellowy chipboard wallpaper, with a chocolate feature wall, and a door, door frame, and window frame that were a lovely mustard colour. For this room I went with a simple white as it is to be my studio room.

Then finally we set about decorating the front room, which I really liked the colour of but just needed freshening up. I thought that being that it was a creamy colour that it would be quite an easy colour to match, but how wrong was I! So another ten tester pots later we ended up painting it Vanilla.

By this point it was a week before Christmas, I had no Christmas shopping done, no packing done, and was knackered after weeks of fitting in painting after work and on my days off.

Then we decided that we really wanted to be moved by Christmas, or at least have the essentials over. So after a mad rush of packing and staying up until 3am on the night before we moved so that the furniture could be got out out, we managed to get everything done. (Even if it did mean having a flat that had so many boxes everywhere including in the kitchen, bathroom and even bath that we could barely move!) I then had to work on the day that we moved which was on the 19th December 2014, but luckily my hubby had two weeks off to help which I could have really done with myself!

After we moved in came my first chance to get into the Christmas spirit, so I decided that as it was going to be our first Christmas in our own place that I really wanted to get a Christmas tree. I love Christmas but we hadn't bothered with a tree for years at the old flat, as we didn't have the space and never spent Christmas there anyway. At home when I grew up we would always have a real Christmas tree, so I wanted this to be the case for us too. So on the 22nd December just in time for Christmas I got my real tree after winning my hubby over, as he had said that it would make too much mess like the one that I insisted that we had the first year that we were together!

Below you can see my happy little tree, complete with the lovely new Nordic decorations that my mum and dad had bought me back from their holiday in Cornwall! I was really pleased with how it turned out and loved it, so I was rather miffed when the time came to take it down. 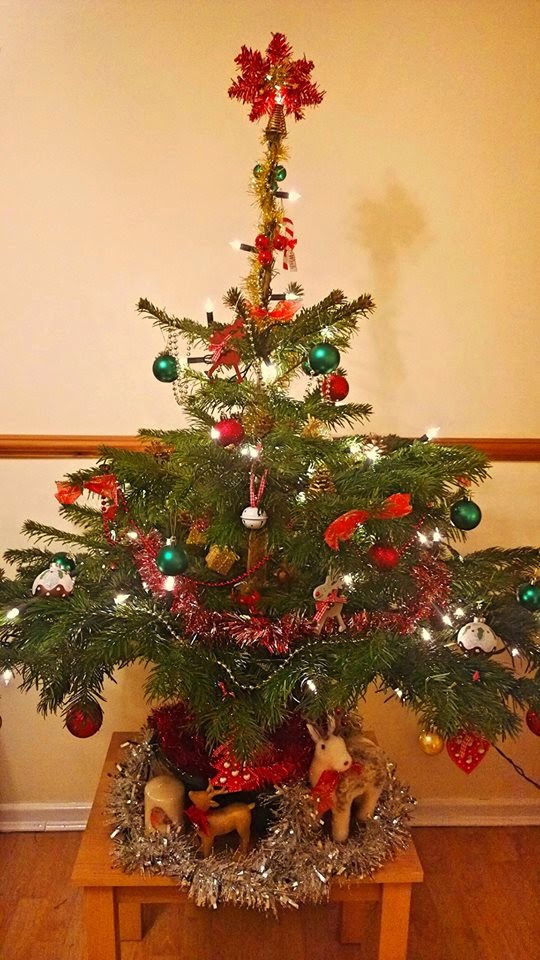 So Christmas came and went even more quickly than usual this year after everything that had been going on.

I only had Christmas Day and Boxing Day off of work as usual! So Christmas Day was spent chilling out at my parents with my hubby, mum, dad, sister, and nanny. Then Boxing Day was spent at my hubby's mum and step-dads in Croydon, along with his two brothers and their other half's, his sister and her other half, plus his two step brothers and one of their girlfriends, his Nan, and three nephews. There were seventeen of us altogether so it was a little mad, but enjoyable! In-between all of this we also had my hubby's dad’s 60th party and a pre-Christmas with him and his partner, as well as all twenty of this side of the family!  As he and his partner were off to India for his birthday present for two week over Christmas and New Year.

New Years Eve was spent with my hubby and friends at a local pub, before we moved on to a cocktail bar,  and then to a house party. So that rounded off a good but pretty hectic and stressful end to 2014.

Now that we are in to 2015 things have finally slowly started to calm down a little. All of our new furniture has arrived and been built, and after a lot of trips in my car I have finally managed to finish moving over most of our stuff over from the other flat this week. The idea was to sort everything out before we moved it over, but the estate agents want to get into the old flat to value it and show people around before the landlord re-lets or sells it, so we have just had to get everything over in order that we can clean the old place. So needless to say the new place looks a bit of a tip right now, and is full of boxes of stuff that all needs sorting. I know that I am a bit of a hoarder but it isn't until you move that you realise just how much stuff that you have! We are settling into the new place nicely though despite all of the un-packing that needs to be done!

We have had a few initial teething problems as you always do with these things such as: The boiler stopping working, the oven blowing the electrics, and debt collection letters turning up for the owner’s previous tenants. However most of these issues have now been resolved, but either way we couldn't be happier with the place! We have waited for this for a long time and it has made such a difference to our lives already. It's the little things that you really notice, like having a washing machine that can work properly, no problems parking, being able to fit in a table to eat at, no noisy neighbours waking us up at 5:30am every morning, and no disturbances in general, plus having a bigger and much more pleasant space that I still can't quite believe is ours!

In terms of resolutions for the New Year as usual I haven't really made any as I prefer to settle with goals for the year. Since our main goal from the past three years of saving for a place of our own has now been achieved. This year I would like to concentrate on my illustrating and continue to expand my Bobby Bunny and friends range, blog more, save for a new bathroom and other home improvements, and maybe in time think about starting a family.

I hope that whatever your resolutions and dreams are for the New Year that they all some true, and that 2015 is a happy and healthy one for you all! Thank you for bearing with my over these last few months it means a lot! x

(Also just a quick note regarding my Etsy shop. I had to close it over Christmas due to the move, plus having the internet changed over. It was due to re-open on the 5th Jan but I have had to extend this until next Monday 19th Jan, due to my printer not having been connected up yet. Sorry for any inconvenience.)