Hi everyone! I hope that you are all well and have had a good couple of weeks or so!

Firstly after months of working out logistics and suppliers as well as making prototypes, I am very happy to share with you that I now have two new Bobby Bunny & Friends product lines on sale over at my Etsy shop!

The first of which are my framed prints which I have mentioned wanting to sell on here before, but was having trouble finding boxes the right size, and ways in which to package them without them being damaged in transit. As it currently stands this means that I am afraid that I am only able to sell my framed prints in the UK, but I am however hoping that over time I will be able to offer unframed prints to overseas customers.

Below you can see the framed prints available. 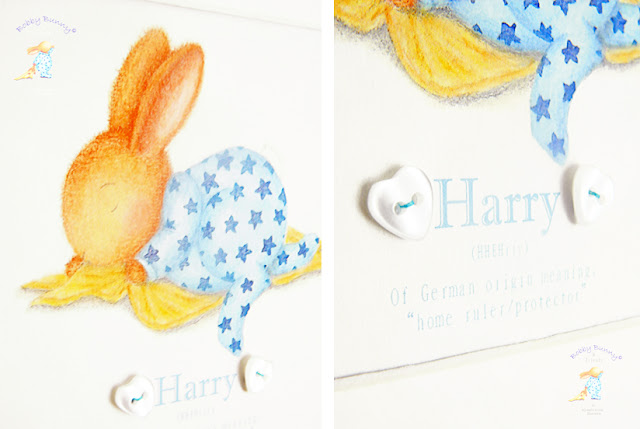 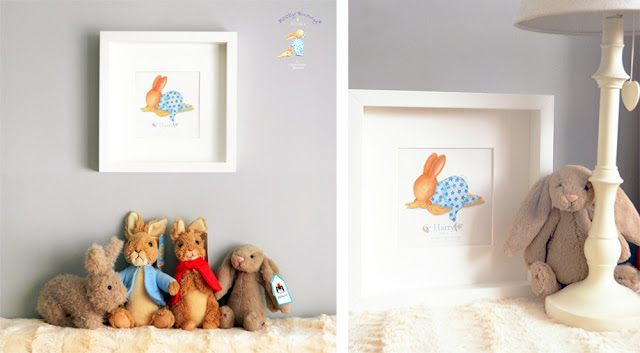 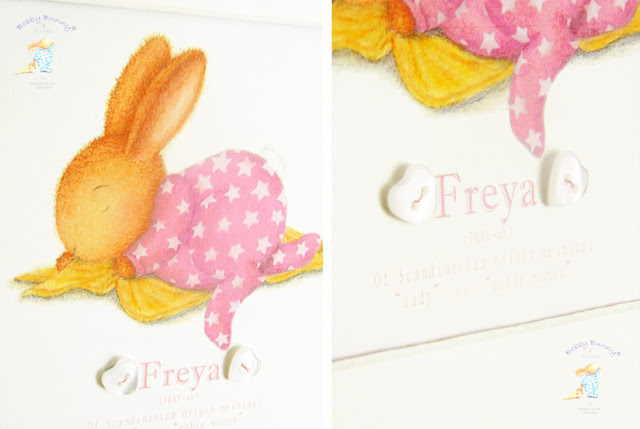 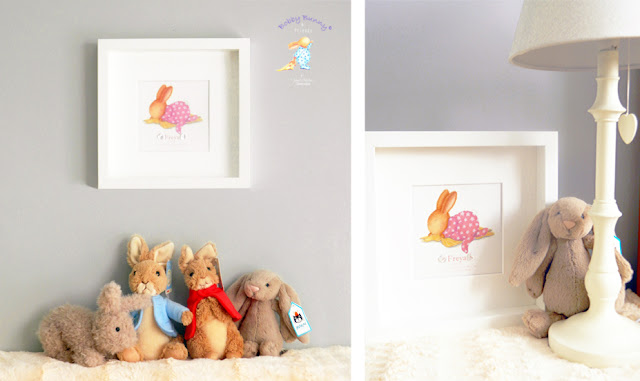 Currently they are only available in this design in both pink and blue, but I hope over time to extend the range to christening and wedding designs etc. You will also notice that the frame design has changed from the ones that I originally blogged about last year, which were made as gifts for a couple of friends. There are a couple of reasons for this, one just simply because I preferred them and because they look more modern and simplified, but also because the frames are deeper meaning that I have more freedom as to what buttons I can use to accent the image as I am not limited to space. They are also a little smaller which means that they aren't not quite as fragile! The only downside is that the image is quite a lot smaller due to the large boarder mount, but I kind of like that as I think that it makes the image more quaint.

The second new product line is again one that I have been working on for a while now, and is that of personalised heart name plaques. They took quite a lot of trial and error to get right, and I am still learning the right technique to get the best results from them, but I am pleased with them as you can see below. 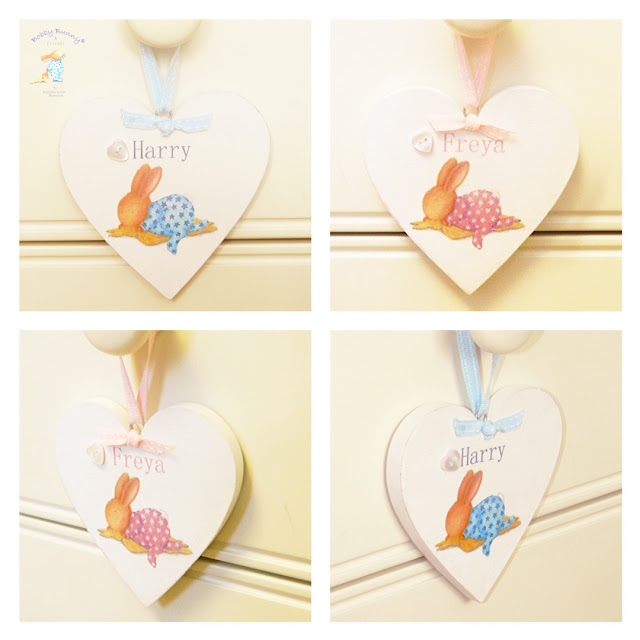 Again they are currently only available in the one design in both pink and blue, but like the frames I am hoping to extend the range to christening and wedding designs etc too over time.

Both the girls frame and heart plaque pictured above were made for a close friend who's baby shower I attended a couple of weekends back. Thankfully she loved them as did a number of other girls in attendance, which meant that I got to do both a bit of networking plus it was nice to get some feedback on my new products.

We all had a lovely time at the baby shower, and my friend's sister-in-law and sister-in-law to be did a fab job of organizing it all. I did however have a bit of a ditsy moment before hand driving 20 or so minutes down the road to their house, just to find that the baby shower was actually being held at her hubby's parents house!

Below you can see a few pics from the day, and some of the games that we played! 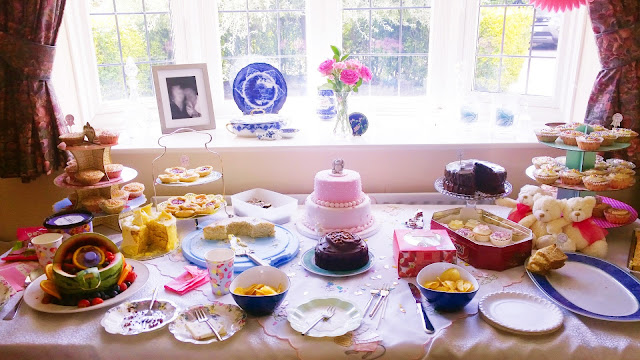 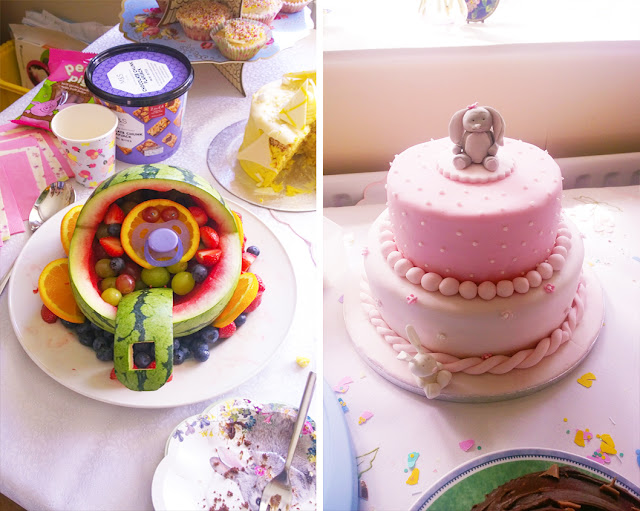 The very imaginative fruit pram and baby and the gorgeous baby shower cake that was made by one of my friends friends, complete with a bunny on top as she is probably as crazy about bunnies as I am!

Milly the cat getting in on the present opening action

Pin the dummy on the baby (which I did much better at during this baby shower than the last one that I went to, getting 3rd closest,) and the lovely party bags!

Since then my friend has given birth to little baby Freya Hope who arrived three and a half weeks early, weighing a healthy 6lb's 6oz. I am over the moon for them as they have been through a huge amount over the past year, but they have come out the other side and now have their happy ending and I can't wait to meet their little lady!

Besides this things have been a little quieter here the last few weekends after the madness that was June, but we have still been relatively busy! Firstly with the hubby going off to Maguluf for three nights for his brothers stag do, which I had take him and his brother to the airport for at stupid o'clock in the morning on the weekend before last! I also had a night out for a friend's birthday.

But I've had down time too, taking my autistic cousin swimming for my auntie over the last few Friday's due to his rest bite carer cancelling on them. Plus my auntie is also currently recovering from a big operation on the vertebrae in her neck, and is so unable to take him herself. Then this week I also took him to visit the funfair in town after too as he was desperate to go on the bumper cars, which he loved and thoroughly chilled him out!

Like most autistic children/young adults he is very routine based, and loves to go off with his dad after swimming each each week to get his fish and chips. So as the weather has mainly continued to be in the high 20's and low 30's here over the past few weeks, and with my hubby away on the stag do, I decided to go and get my own fish and chips and eat them in one of my favourite local spots which I have mentioned on here many times before! I'm glad that I did too because it was glorious evening up there and so quiet, with only the sound of the cricketers playing at our local club in the distance. In fact it was so nice that I ended up doing the same thing last Friday after swimming, on what was once again a beautiful evening, only this time with my hubby in tow too!

Below you can see my yummy fish and chips and what a glorious evening it was, plus if you look closely you will be able to see a bunny too!

That pretty much rounds everything up with one big exception, and that is the fact that I have gone and got myself a part-time job!

I wasn't looking to find anything to fit in around my illustration until the end of Sept when my redundancy is due to run out, but it came up, it was somewhere I wanted to work, and the hours were perfect!

It has all happened pretty quickly with me having only applied for the job a week and a half ago, but since then I have had interviews with both the manager, and area manager, and been offered the job! So as of Friday I am going to be a gift advisor for 15 hours a week, normally on a Tues, Weds & Thurs afternoon for a local family run gift shop, which I have to say I am really looking forward too! The team all seem lovely, it will be nice to work in an area of retail that I am interested in, plus have a new challenge, and they sell so many lovely things too! I will just have to make sure that I don't go and spend all of my wages in there!

To celebrate my hubby and I then met up with my parents for a meal to celebrate at one of our favourite pub/restaurants. It was good to see them, plus good for my dad to get out too as he is currently recovering from his second hernia operation.

Below you can see the yummy but filthy food that my hubby and I had on a dinner date to the same pub/restaurant the week before, just after he got back from Magaluf. Plus the huge strawberries that we had when we got back home! They weren't kidding when they said that all of the good weather that we've been having had created a megga crop this year! I affectionately named this one megga-strawb! 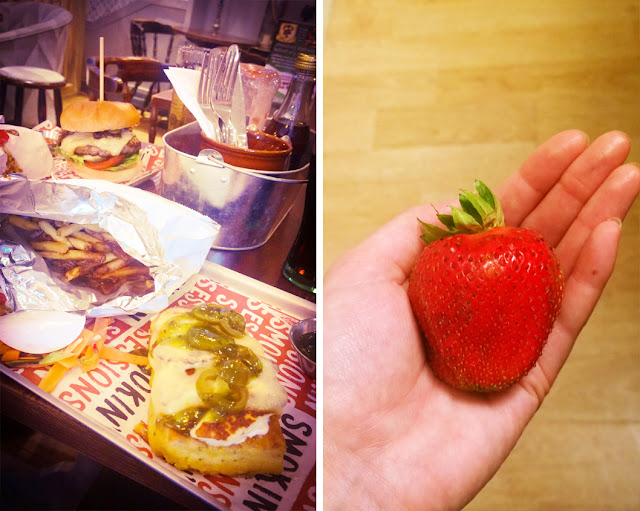 So that's about it really! I'm now off to cook dinner and finish the three heart name plaque orders that I currently have on the go whilst gazing out of the window at a lovely evening that we have here, after having had torrential rain over the past few days! We did need it though to be fair after all of the hot weather of late, and it's also made it much cooler after all of the mugginess and lack of storms that we've had to clear it! So I am much happier about that!

I hope that you are having a lovely evening and week wherever you are, and that the weather is being kind to you too! Thanks as always for visiting! x
Posted by Jenny at 19:14 No comments: