Lots Of Birthday's And Lots Of Food!

Hi everyone! I hope that you are all having a good week and that you're getting ready for the weekend that's on the horizon! We have had a couple of busy weekends celebrating birthday's here, so I am hoping that this one will be a relatively quite one!

Firstly on the Saturday of the May Day Bank Holiday weekend we celebrated one of our nephew's birthday's at my-brother-and sister in-laws. Luckily it was held on a day which turned out to be one of the only sunny and warmish ones that we've had over the last few weeks, as there was a bouncy castle in the garden for the kids.

It was a lovely day spent catching up with the family, despite the fact that I was rather stressed when we arrived as I had been rushing around all morning trying to get the flat and food ready before we left, as I had the girls coming around to celebrate my birthday that evening before we were to hit the town, and I knew that I wouldn't have time to do it when we got back!

Luckily the girls arrived at ours a little late as we only just got back on time after dropping people off, which I knew would happen! But again I had a good time once I was ready and able to relax!

The third birthday that we celebrated on the weekend just gone was that of my sisters, for which went out for a lovely late lunch with her girlie friends on the Sunday, before going back to her and her boyfriend's new flat after for drinks and nibbles.

We then went out again with my family on Tuesday for her actual birthday to a lovely steak house, where the food was just gorgeous!

Below you can see the yummy chorizo, onion, and bruschetta starter that I had, followed by a medium steak with peppercorn sauce and fries!

Needless to say after going out for both of those meals and a meal in the week for a rare date evening with my hubby, plus attempting my first Shepherd's pie last week, I feel like I need to behave a bit this week both on the food and drink front!

Below you can see my efforts with the Shepherd's Pie, which I have to say went down very well with the hubby! 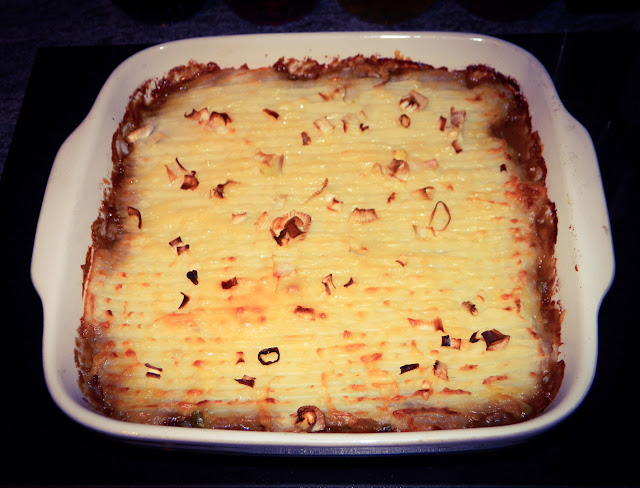 On the Bobby Bunny & Friends front I have been busy over the past few weeks converting my new "Mum To Be" and Baby Shower" cards into different colour options, print testing them, photographing them, and listing them on my Etsy shop. Below you can see my test prints and some of my photographs of the cards ready for Etsy. 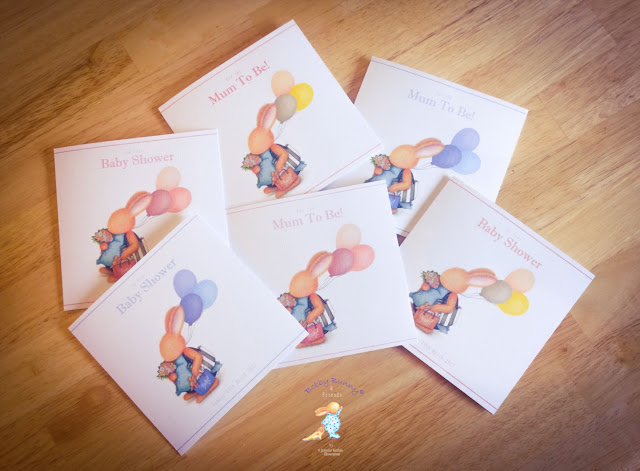 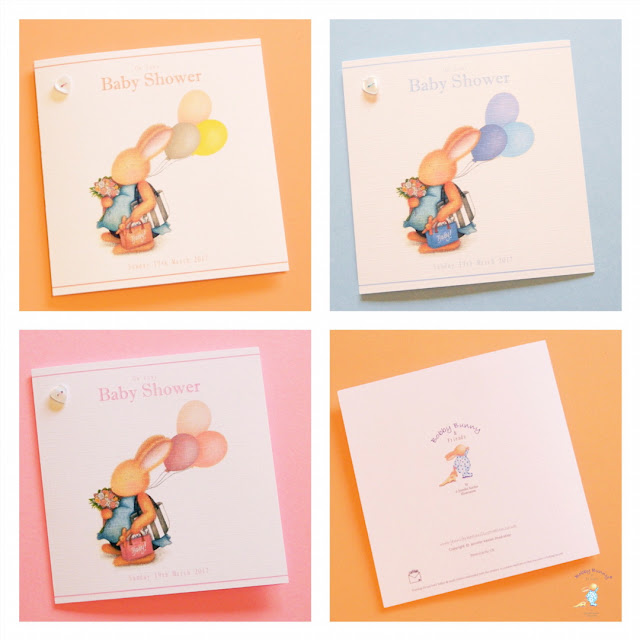 As well as this I have also designed and ordered some Bobby Bunny & Friends flyers which turned up yesterday. I am really pleased with the quality of them as they look and feel more like postcards. Perfect for putting up on notice boards as I wanted!

Once again I ordered them through Vistaprint as I was happy with my business card from them, plus they offered the best value for money as I had a voucher for them.

Below you can see how they turned out! 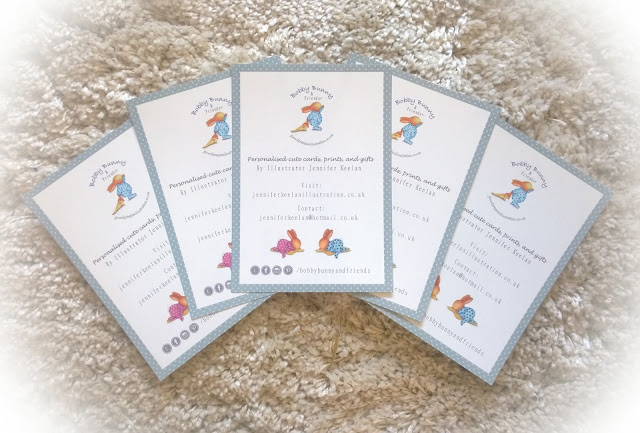 I have also been working on getting my studio room looking like a studio room rather than a junk room! I am getting there, but there is always going to be clutter around when I am about!

Below you can see the progress that I have made so far along with the lovely sign that hangs on the door, which I also got for my birthday but that I forgot to share with you last time! 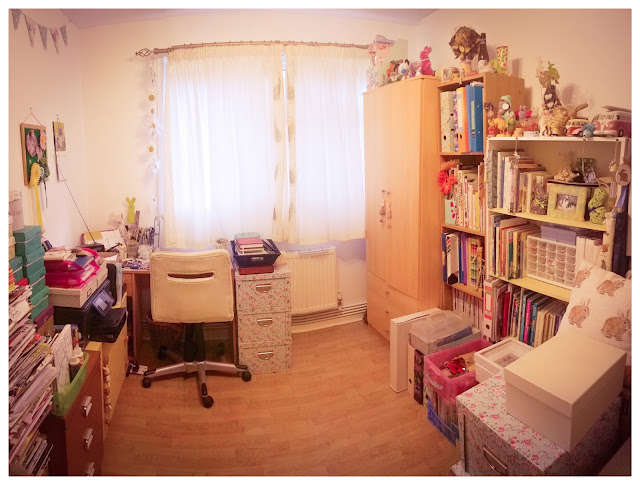 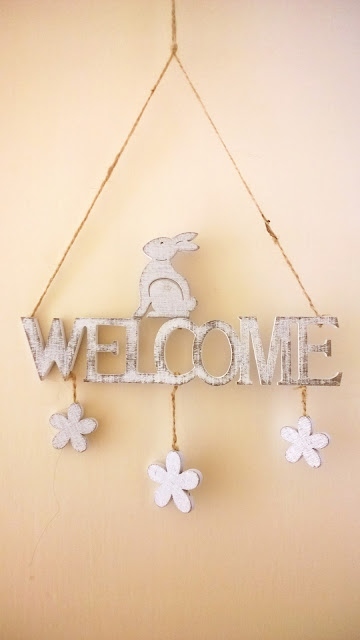 I can't believe that time is going so fast and that it had been nearly seven weeks since I left work already, time sure does fly when you are doing something that you love! I do have days where I freak out a bit about the fact that it is going so fast and that I am quickly running out of time before my redundancy runs out and I need to be earning more, but I am doing everything I can to make it work which is all that I can do really.

On the Florrie front her grass has grown so very much in the couple of weeks since I last blogged, that she was able to have her first taste of it on Sunday! As you can see below you can tell from the look on her little face that she liked it! 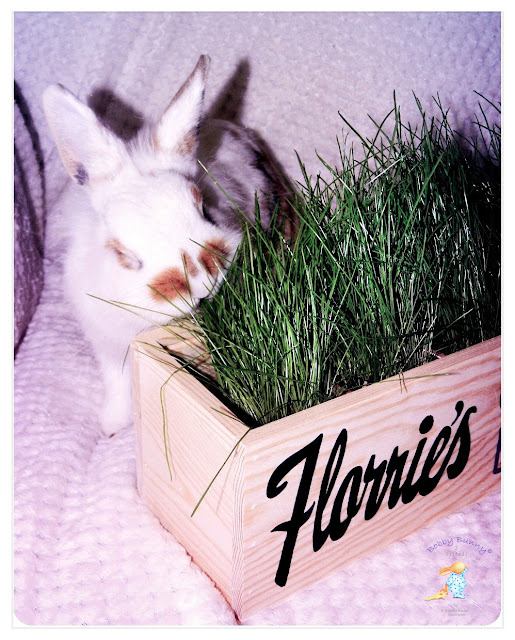 Needless to say at nearly a week in since she first tried it, it is now substantially shorter and may need to do a bit more growing!

The other Florrie first that also took place on Sunday was her taking her first steps on the front room floor, or should I say our rug as there is no way that she will walk on the wooden floor as it's too slippy! To be honest she was still a wimp when it came to the rug though! I knelt with her on the floor and she just sat there on me for a good ten mins or so refusing to move, which she never does when she is in her comfort zone! Eventually she did get down but only after a lot of coaxing, and even then she kept coming back to me for safety. I'm pretty sure that I could have left her on that mat all day and that she wouldn't have got off of it! She's such a funny thing! Like I say when she is in her comfort zone of the hutch, sofa, or our bed she's a confident little monkey, but anywhere else she is very timid. As for the ladder to her play pen, she still won't use that either! We can leave the hutch door open all day and she won't even try, and even when she chews the bars for attention she still won't use it the little toad!

On the picking up front we have now got to the stage where I have to dismantle the whole hutch in order to get her out, as the clever little monkey has got so wise to me tempting her up the top with treats that she runs back down the ladder as soon as I move towards her, let alone pick her up!

To be honest though even though dismantling the hutch is a faff she seems to be more relaxed with me picking her up from the bottom, as I tend to clean her out first which relaxes her a bit before picking her up. She's still not keen, but there has definitely been less snorting and squeaking going on from the hormonal little monkey.

As far as the nail clipping goes I have given up trying as she just pulls her paw away every time the clippers touch her nails and I am going to end up hurting her, so again it is a bit of a faff and stressful for her but it is going to have to be a vet job as it is not worth the risk. Again she seems to have got worse for this as she has got older and more hormonal! In time when she is a bit older we will get her spayed, as much as she and I will hate it! But it needs to be done, as regardless of her behavior over 80% of un-spayed does get uterine cancer before the age of five if they are not.

Lastly in the last couple of weeks or so despite us supposedly meant to be coming into warmer spring weather (not that we seem to have had much of that lately, regardless of whether the sun is out or not!) Florrie seems to have decided to grow a bit of a lion mane, or should I say a neck ruffle as it looks like when she is sitting! Her fur has definitely got longer and thicker around her face and her head more like when she was a little baby, but she seems to be thinning out around her bum again. To accompany this for the first time I am starting to find fluff everywhere too, so I think that I will have to hoover more often even if her ladyship doesn't like it!

Below you can see Florrie taking her first steps on the rug, and her sprawled out in what we refer to as slug mode! She's such a long bunny!

Plus apparently what remained of Florrie's tube made a good chin rest! 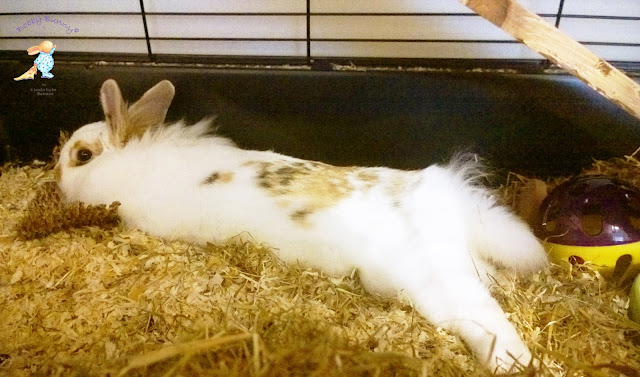 Thank you for dropping in and enjoy the rest of the week/weekend, and hopefully the weather will be kind! x
Posted by Jenny at 17:39 No comments: