Three out of the last four weekends since I last blogged have involved us attending weddings, so I thought that I would give you a little rundown of these three beautiful days!

The first was held on the August bank holiday weekend and was the wedding of one of my oldest friends. We have grown up together and known each other all of our lives as our mum's were anti-natal friends, so it was rather a special wedding for me. The ceremony was held at the Bride's parish church, and was then followed by a reception at a beautiful 15th century manor house just down the road from the church. There were two best men one of which was another friend that had also grown up with the Groom and I since we were babies, and who's mum was also within the same anti-natal group of friends. It was also lovely to have my parents, groom's parents, and best man's parents all together as they are very rarely all together these days. I even found myself unexpectedly getting a little emotional over the best man's speech as he reminisced about our childhood and college days together. It truly was a lovely day and minus the odd spot of rain on the way to the reception, the weather just about held out for them so that they managed to get the outdoor photos that they so wanted.

Below you can see a selection on photos to give you a taste of the day! 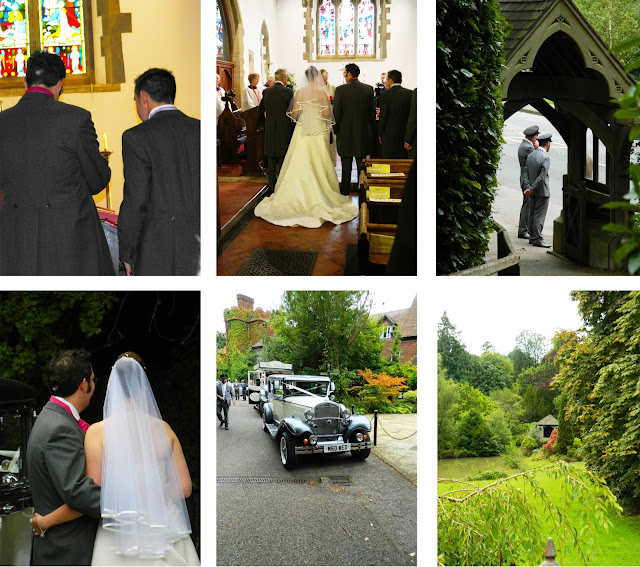 You can also see the his and hers wedding cakes that they had, as they couldn't decided or agree on just one! The groom has always loved Lego ever since he was a young child so his cake was very aptly themed in this way, complete with a Lego Bride and Groom with wedding scene as a topper. His shoe and handbag loving Bride also had a cake that was equally apt for her, which was very girly and was adorned with her favourite colours, bows, sparkles and frills. 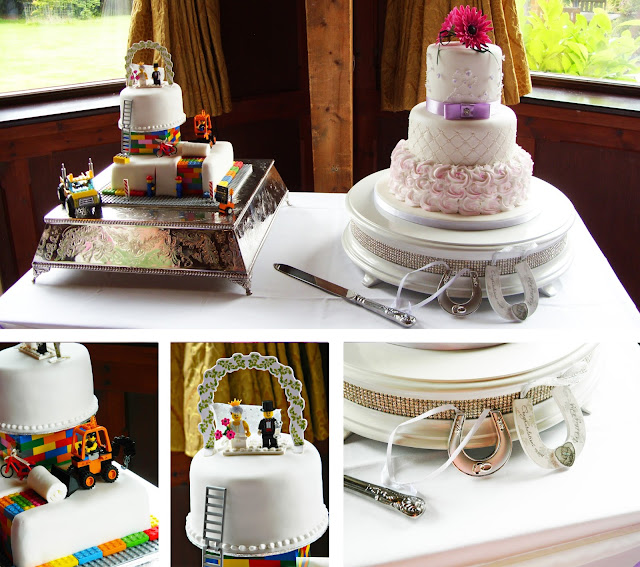 The second wedding that we attended took place on the Friday of the following week, and was the wedding of my hubby's Best Man. The ceremony took place in a little country parish church, and the reception was held just down the road in a stunning Neo-Gothic Victorian manor house which is now a hotel. You can see from the pictures below just how gorgeous the venue was, with its towering presence, grand windows, chandeliers, and views over the Surrey Hills. My hubby was also the Best Man on the day and did a sufficiently good job at embarrassing the Groom during the speeches! Once again the weather was overcast and threatening rain but the day brightened up as it went on, and they even had a little sunshine in the end. The day was then finished off with the cutting of three cakes, a live band with lots of dancing, a hog roast for the evening guests, and shots with sparklers in the grounds. 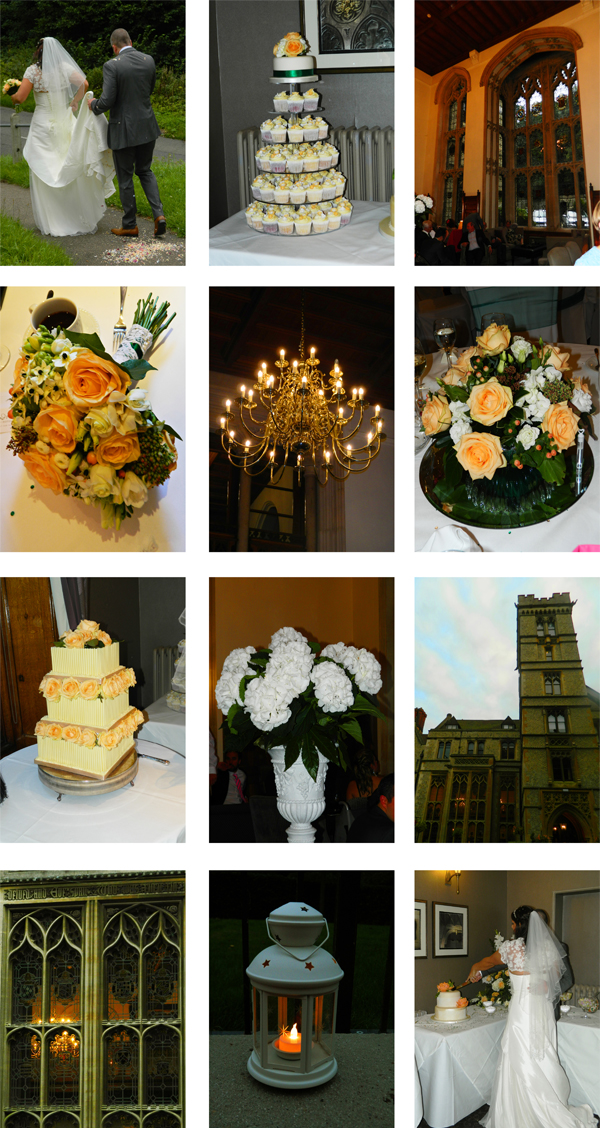 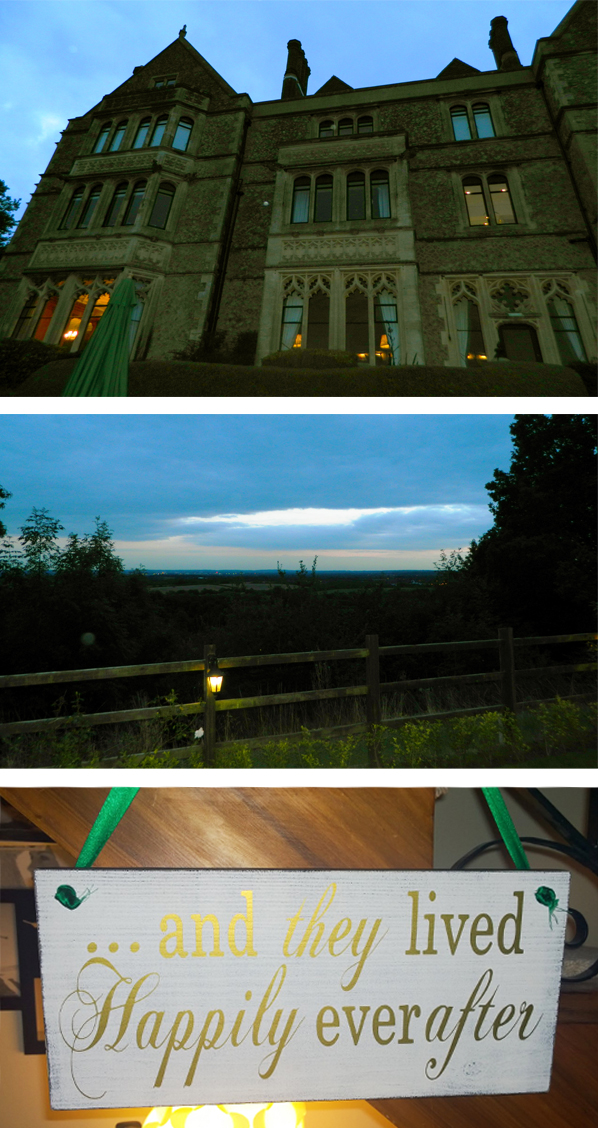 The third and final wedding that we attended took place last Saturday and was that of my Mother-in-Law. Both the ceremony and reception took place at a lovely golf club in their hometown of South London, and having been married before over thirty years ago the Bride decided to wear red rather than a traditional white dress. It was a lovely day filled with over 150 family and friends, and was also a long time coming being that the Bride and Groom have been together for over fourteen years! The weather was beautiful all day, the speeches were also both hilarious and emotional and were given by one of two very nervous Best Men that the Groom had, by the Groom himself, the Bride, and the Brides Best friend. My Sister-in-Law was Maid of Honour, and my Hubby himself also walked down the aisle with our three little nephews as Page Boys, and who looked gorgeously cute in their little suits! Once again it was another amazing day filled with lots of love, laughter, and dancing, particularly from the Bride's mum who despite being in her eighties can certainly still move!

Below you can again see a selection of images from the day! 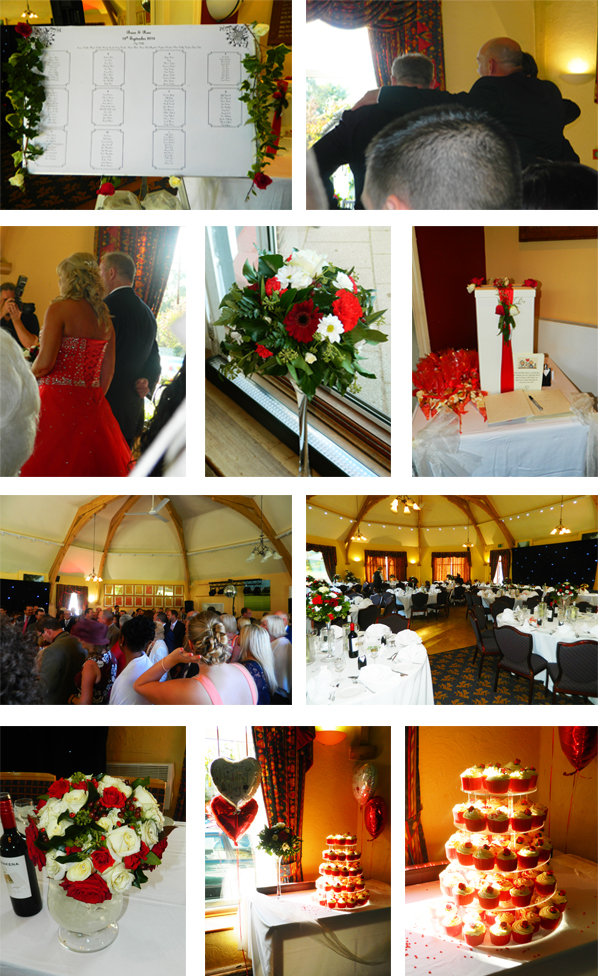 So after three wedding filled weekends and having had a very busy time at work lately, the hubby and I are having a quite one this weekend, minus me working, as we are pretty knackered to say the least! So today will be spent chilling with a possible venture outside as it is gorgeous out there this morning, and hopefully there won't be any of the heavy downpours that we have been having between the sunshine lately! Autumn is on its way and there is a definite chill in the air in the morning, even though the days are still warm. I love this time of year though and am glad that the mugginess has now gone!

I hope that you are all having a fab weekend too! Before I go I just wanted to share with you these beautiful roses that a customer at work gave me a few weeks back for re-uniting her with her lost phone! Working with the public in retail is not always the easiest of tasks, but it is lovely when you have nice customers that acknowledge the work that you do. 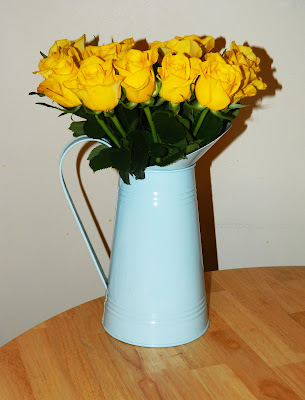 Also the beginning of this month marked not only my 3rd blogging birthday, but I reached the 100 like's landmark on my Bobby Bunny and Friends Facebook page! So I just want to say a massive thank you to all of you that come back to my little blog and read it post after post, that have bought a Bobby Bunny and Friends card, and for those of you that have liked and shared my page. Especially recently when I have not had the time to blog, post or illustrate much. It really does mean the world to me and your ongoing support spurs me on with my little business. Thanks again and have a good week! x
Posted by Jenny at 12:27 No comments: