Evening all! I hope that you are well! I just thought that I would hop in quickly to show you my new Bobby Bunny design. This design is especially of Mother's Day and features Bella bunny handing her mummy some flowers, after she had been digging around the garden to find them. She is also trying (not very successfully) to conceal the evidence of this behind her back!

I have made this card especially for my mummy, but it will also be going on sale in my Etsy shop shortly. 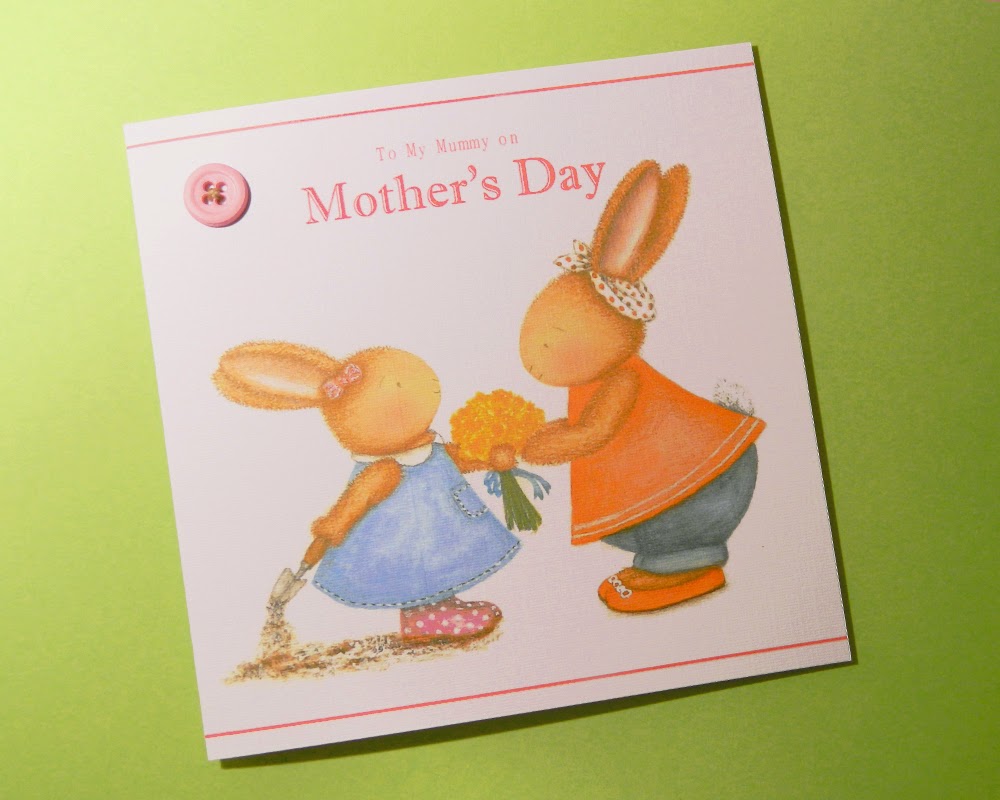 Whilst I am here I would also like to share with you a few pics, of some of the beautiful sunsets that we have been having here over the past week or so. The quality of the pictures is not great as they were taken on my very old camera phone, plus the ones on the left were also taken on a moving train on my way back from a work trip in London. The ones on the right were taken on a different day whist I was walking home from work. 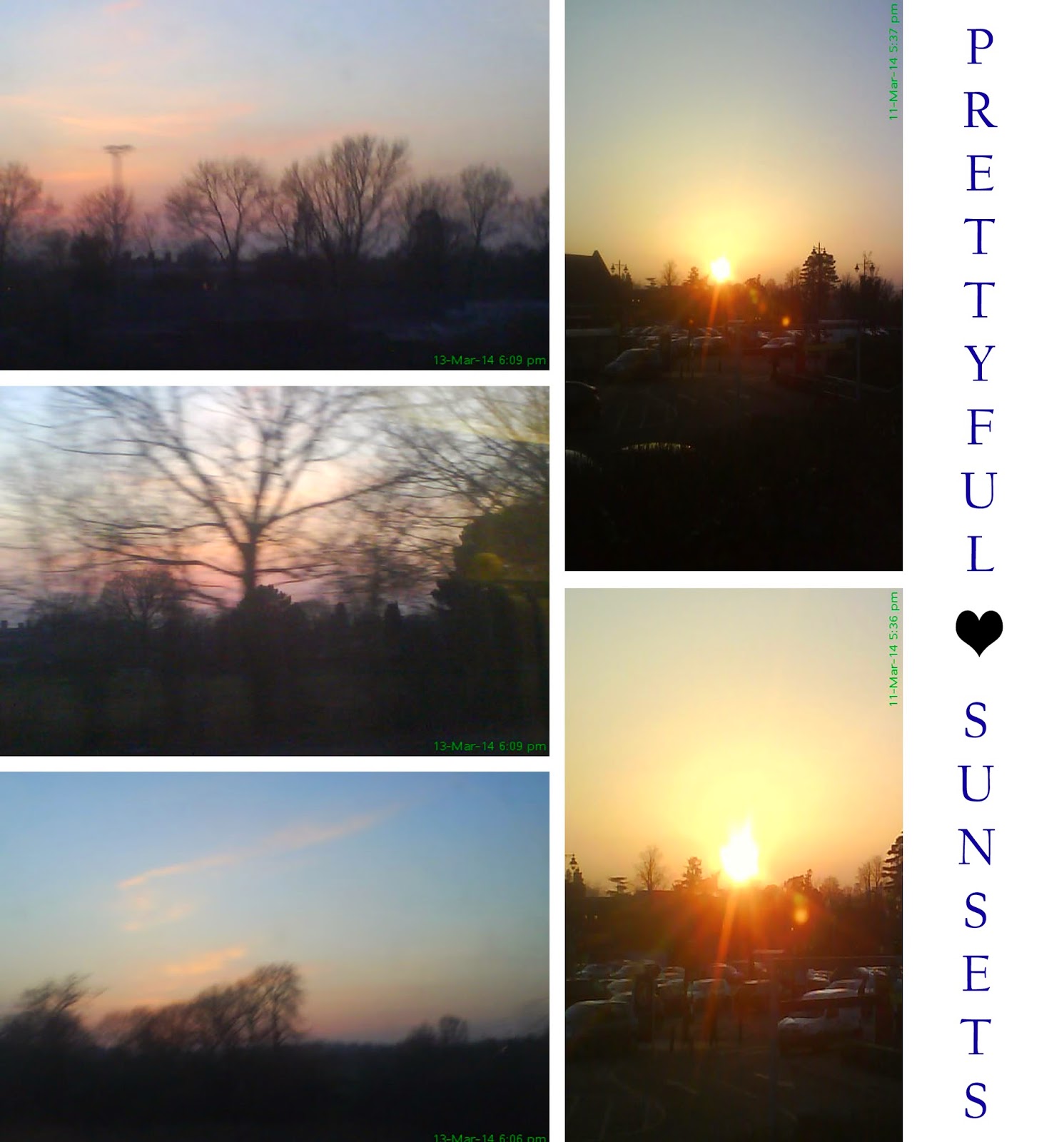 Sitting on the train looking at these lovely scenes I was thinking about how beautiful sunsets are and how I don't know anyone that doesn't like sunsets. Thinking of this then brought back one of my earliest childhood memories. I was only about two at the time and had been to the park with my mum and some friends on a lovely summers day. The sun was setting as we left and the sky was very orange, I remember vividly what it looked like. Then after seeing it I just remember sobbing, I was absolutely distraught because I didn't know what a sunset was and thought that the sky was on fire! I then remember my mum's friend having to carry me home and comfort me, as my mum was heavily pregnant with my sister at the time. I think the fact that I got myself in such a state is probably why it stuck with me, strange child that I was! I makes me laugh thinking about it now, but I certainly wasn't laughing at the time!

Thank you for hopping by as always it is much appreciated! Have a fabulous weekend everyone! x    ﻿﻿
Posted by Jenny at 22:57 1 comment:

I have mentioned on here before about how much I love the cold and crisp sunny days that you get in winter, but we haven't had many of these at all this winter with the all of rain and mild conditions.
However the weather seems to have finally taken a turn for the better over the past week or so, and we have had some lovely and much needed cool sunny days! So I thought I would seize the opportunity on my day off, and go for a little walk in the countryside. I also though that the fresh air would do me good, as I am currently getting over a head cold and this was the first day that I had started to feel better.
I decided to go for a walk down behind the church where the hubby and I got married as it's a lovely place to go, so still and peaceful yet only a five minute walk from where we live. When you are there it's strange to think that you are literally just a few minute's walk away from the town centre, as it's so quiet and all you can see for miles are rolling fields.
I was hoping to see some bunnies but unfortunately as lovely as the weather was, there were too many dog walkers about for them to come out and play.
It was however not a wasted trip, as firstly I came across three little ducks playing in the river:
﻿ 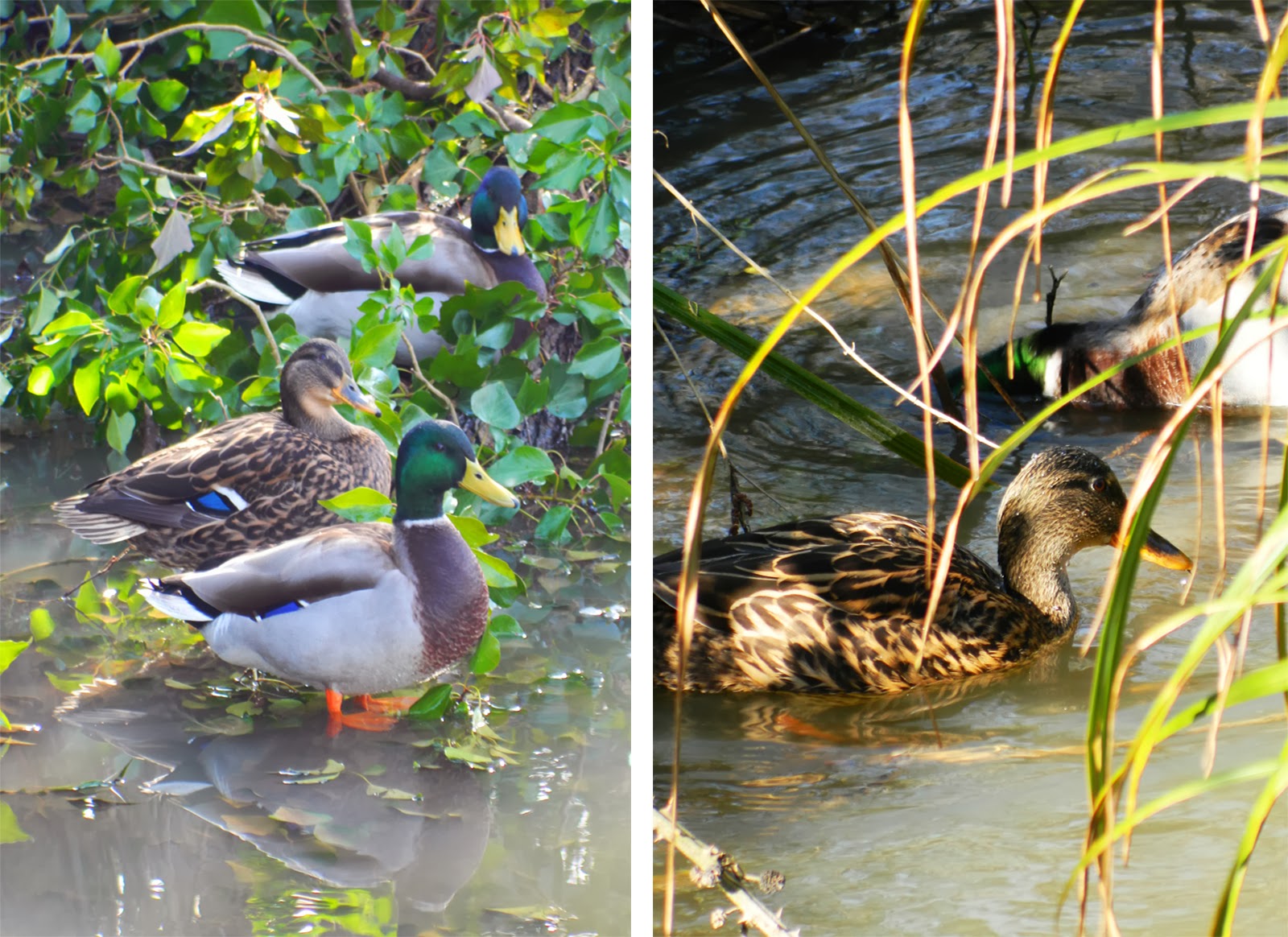 I can only assume that being the time of year; the male Mallards were both trying to pursue the female. Even though they did all seem to be getting along quite amicably at the time.
It would be nice if some little ducklings have appeared by the next time that I go down there!
﻿ 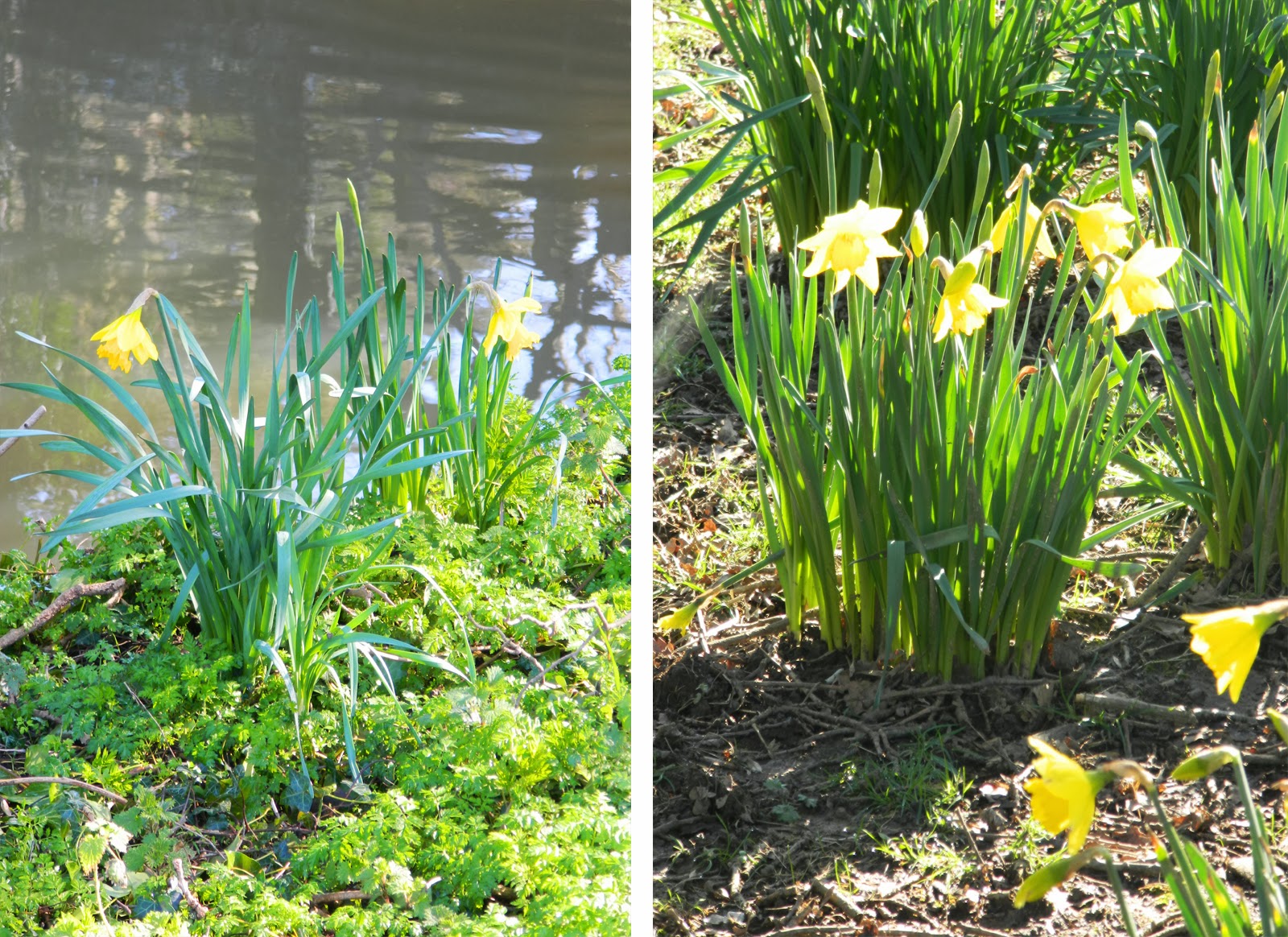 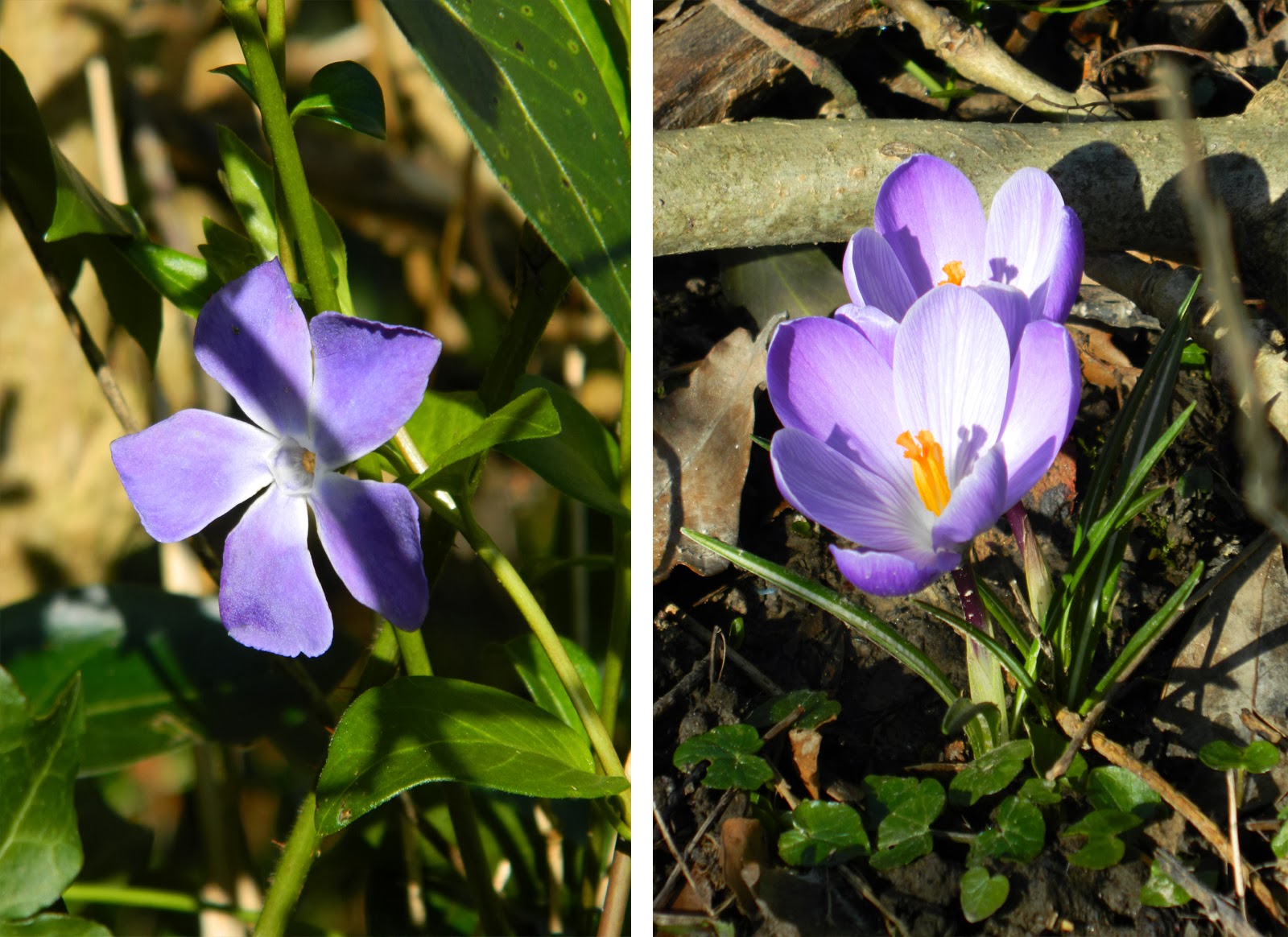 There were also plenty of Daffodils, Crocus's, and Snow-Drops, to name a few of the flowers that I saw coming into boom. Adding some much needed colour to the scenery and signifying that spring is definitely on its way! 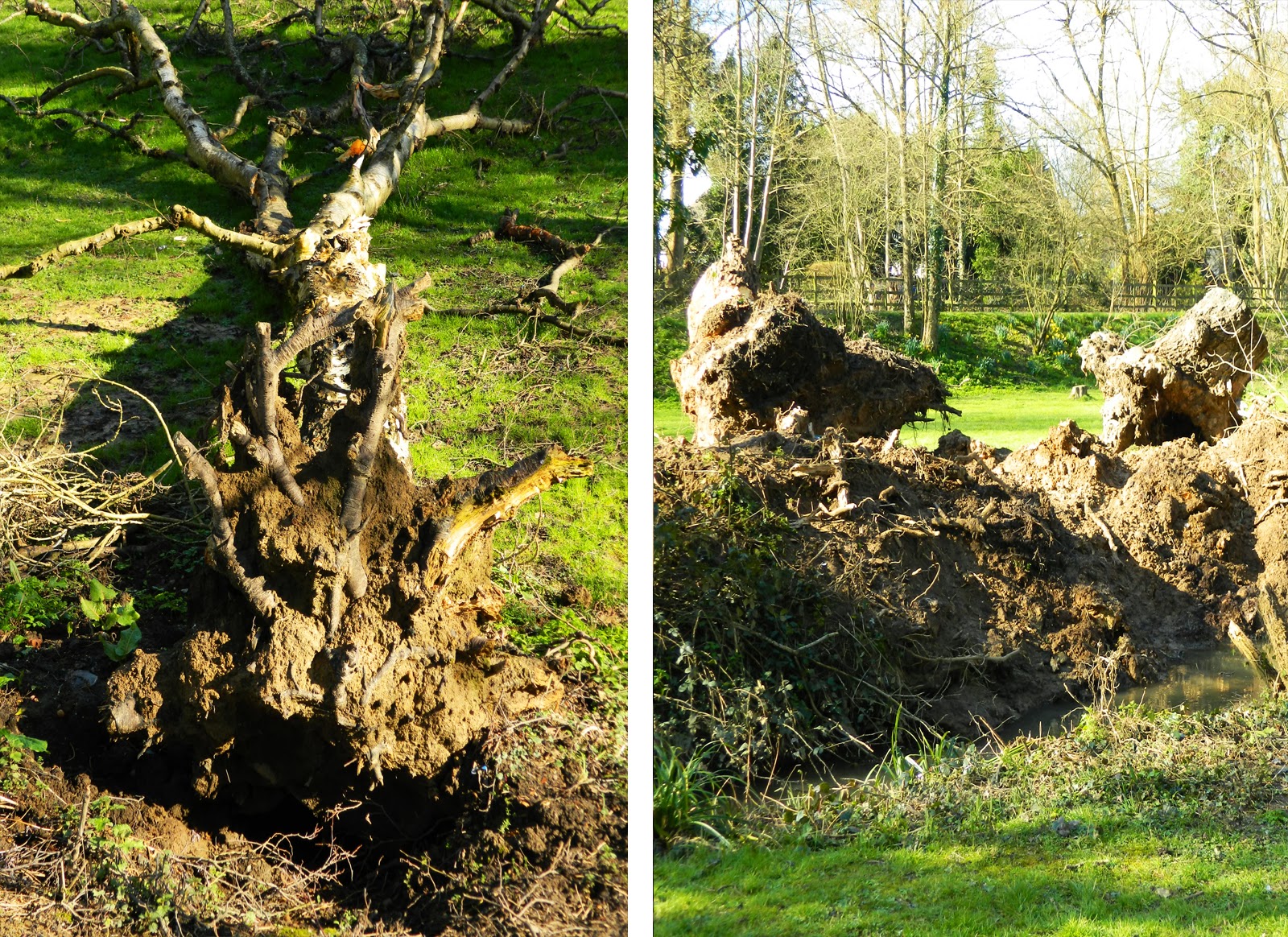 In amongst the flowers and signs of spring though, the damage that the storms and rain have brought this winter were still very much apparent.
I hadn't actually walked down here since the storms and bad weather started at Christmas. So I was quite surprised to see how many big trees had fallen down in this part of town, as there weren't any that had fallen in the large park nearby.
I think that with a lot of them the ground has just been so wet that it couldn't hold their weight anymore and had just given way. 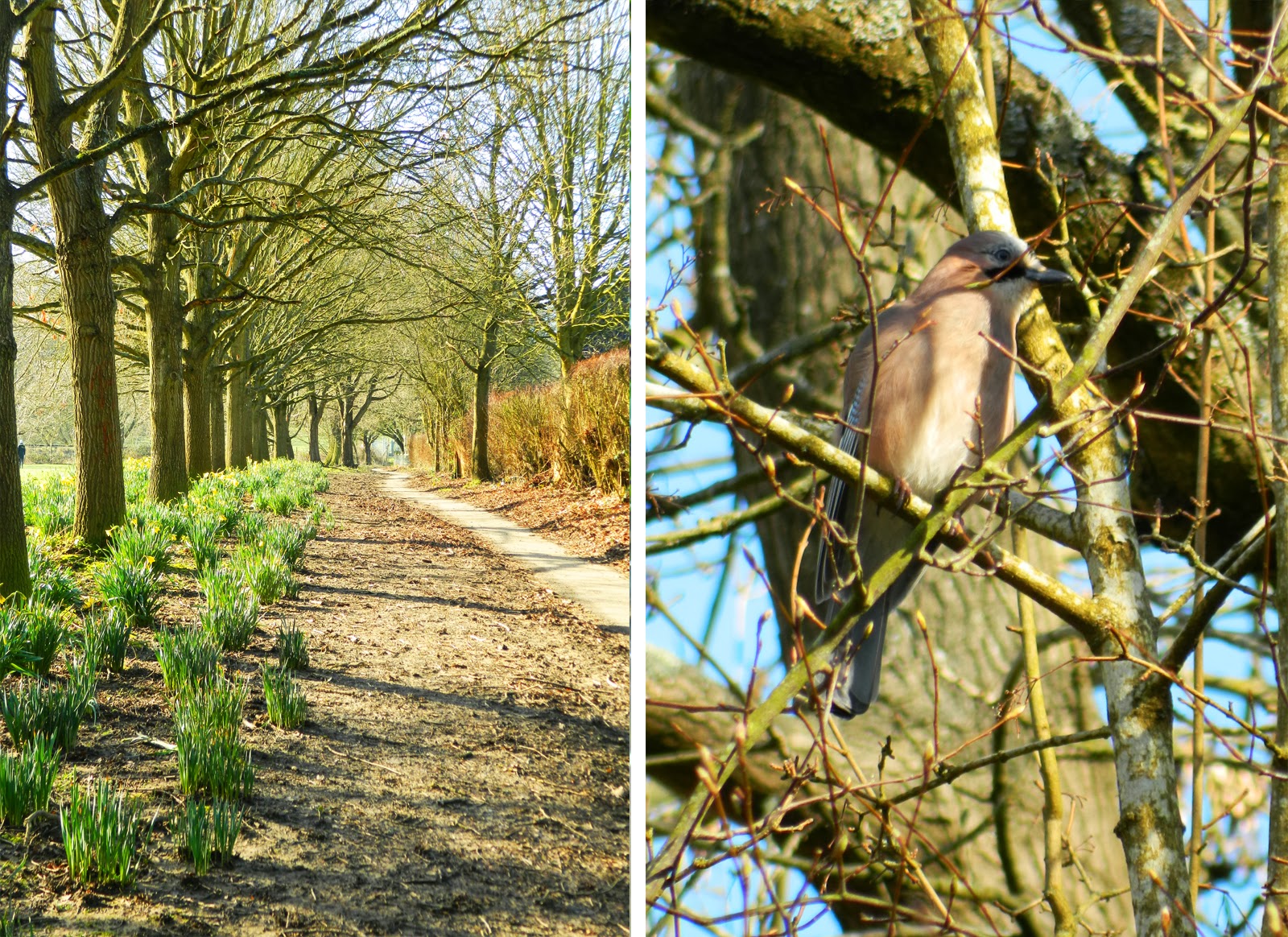 I also got to catch a glimpse of the Jay bird that I mentioned saw way back in my Snowy Walk post, but this time I did actually manage to get a half decent image of him. I don't know if it was the same one as it was a fare while ago, but it was in pretty much the same placed as before so I like to think that it was.

The final things that I saw on my walk apart from this lovely scenery were a couple of Buzzards that I managed to catch gliding over the railway bridge where I was standing. Unfortunately I didn't manage to get any shots of them as they were moving too fast and were too high up to capture, but it was lovely to see.
I spoke to a lady who was walking her dog just after and she had noticed them too. She said that she walks that way every day and had never seen Buzzards around there before, so I felt quite lucky to have seen them. It was definitely a good ending to a nice walk in the country!
I hope that if the weather has been bad in your area that it is perking up now too, and that you are also starting to see signs of spring! Enjoy the rest of your week and weekend, only a few days to go! x
Posted by Jenny at 18:06 2 comments: