A Wedding, A Birthday, Two Hen Nights and a BBQ!

So another six weeks or so have passed since my last post and another packed six weeks it has been!

Firstly back in mid July I had one of my oldest school friends Hen Nights, for which she went to a pottery painting class during the day and then went out for a meal and cocktails in town in the evening. Unfortunately I couldn't attend the day due to the fact that we have now hit out peak time at work with the schools now having broken up, so I was unable to get the time off for this as well as the wedding itself. I did however enjoy the part that I was able to attend, and especially the cocktails! Below you can see a particularly spectacular one that I had!

I wasn't quite expecting it to turn up alight though, and it continued to stay that way for about five minutes after! 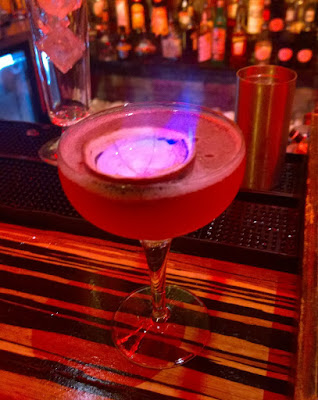 The hen night was then followed by the beautiful wedding a few weeks later, which was held at a breath taking neo-gothic manor house that is now a hotel. The ceremony was a lovely intimate affair that was so romantic as well as being rather emotional, due to the fact that the Bride and her family had faced a massive family trauma just over a month before. But this just highlighted how close the couple are and how much they truly are made for each other.

The ceremony was then followed by drinks outside in the grounds which they were incredibly lucky that the weather held out for, being that it had literally chucked it down with torrential rain throughout the day before. This was then followed by the wedding breakfast which was set on one long table rather than lots of individual one's, with candle lit chandelier's that made it feel rather like we were in a scene from Downton Abbey! The wedding party was then joined by a number of other guests for the evening reception, where we danced the night away to numerous different songs including a number from our college days. All in all it was an amazing day that was enjoyed by everyone.

Below you can see some pictures of the wedding as well as those of the beautiful house and grounds: 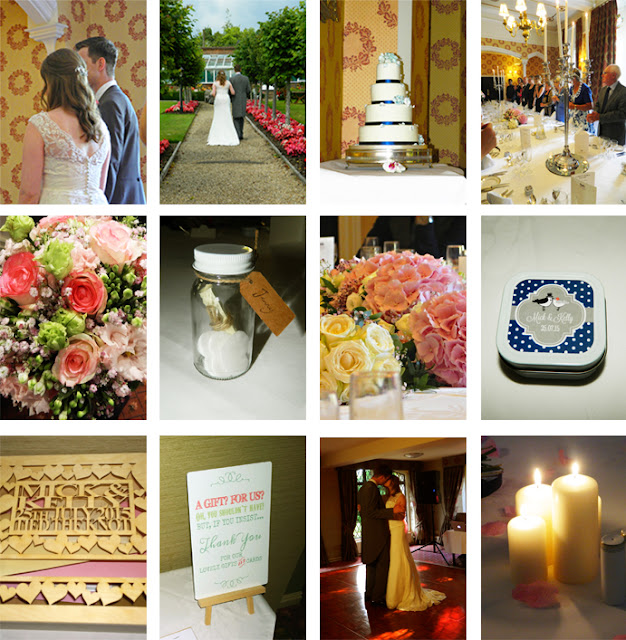 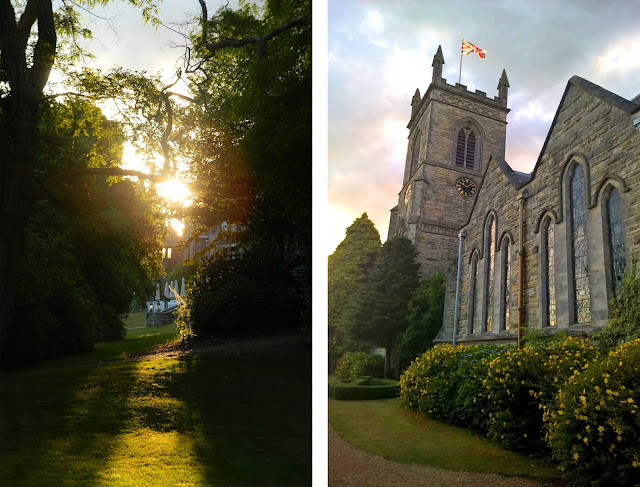 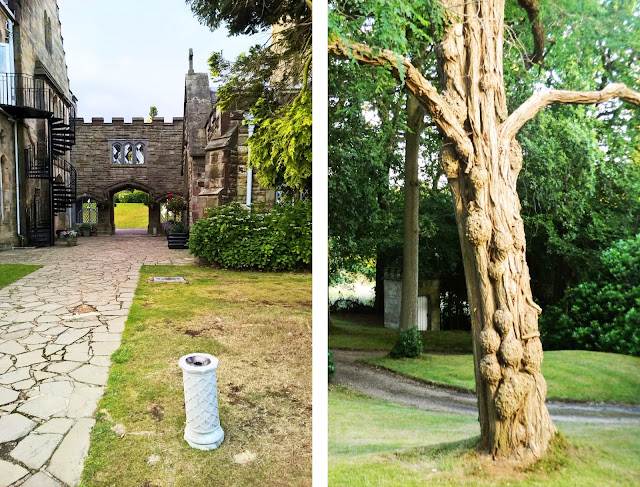 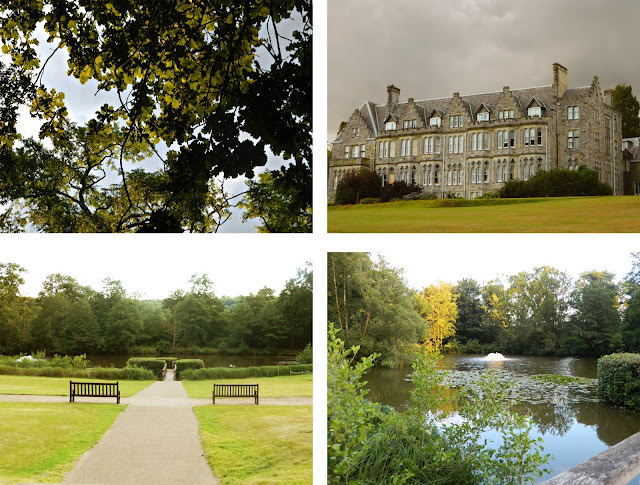 The week after the wedding was my mum's birthday, which not only fell on a gloriously sunny day but also on my day off. So mum, dad, and myself decided to make the most of the weather by visiting Arundel for the day, which is a place that I haven't visited to for years! It is also very rare for us to go out together without my sister or hubby too, so it was good to spend some quality time together.

We started off the day by having a drink in a little café by the riverside, before going for a walk along the river in order to get to get to a lovely little pub/restaurant where we stopped for some lunch. The pub/restaurant was also situated along side the river and as it was such a nice day we were able to sit outside and watch the world go by, which was lovely minus all of the wasps that kept trying to invade us! (I swear that wasps have some kind of magnetic attraction to me at this time of the year!)

After lunch we walked back towards Arundel town and stopped along the way to go out on a little rowing boat on the lake. We left the rowing to dad whilst mum relaxed and I took photos of the many ducks! We then continued our trip into the town passing by Arundel castle. Once in the town we had a little mooch around the shops, bought some lovely fudge, ice-creams, and visited the Arundel Brewery shop, where I bought some local cider for my hubby before we returned home.

Below you can see some of the pics that I took on the day: 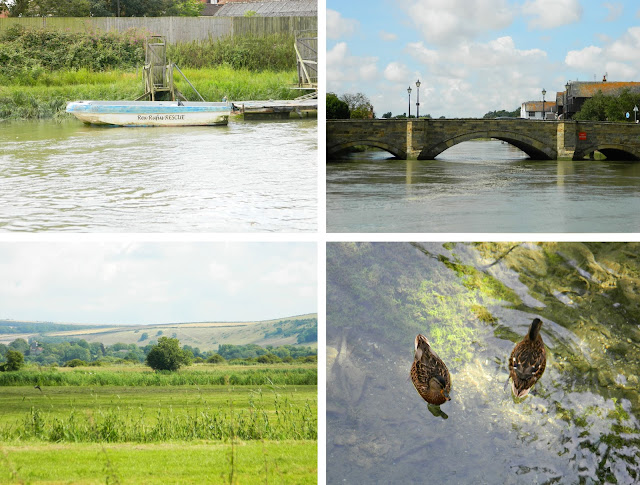 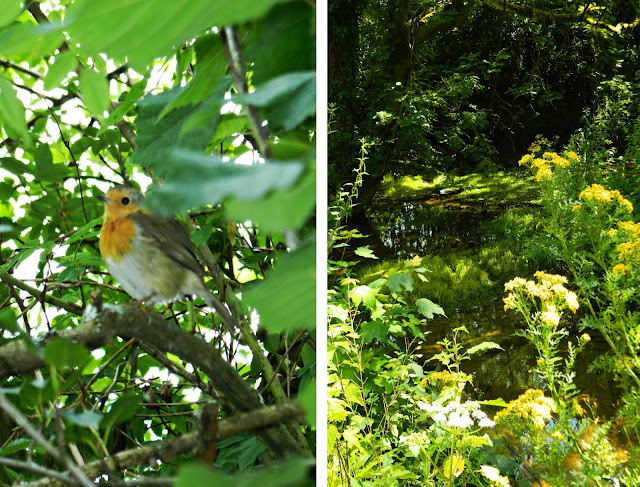 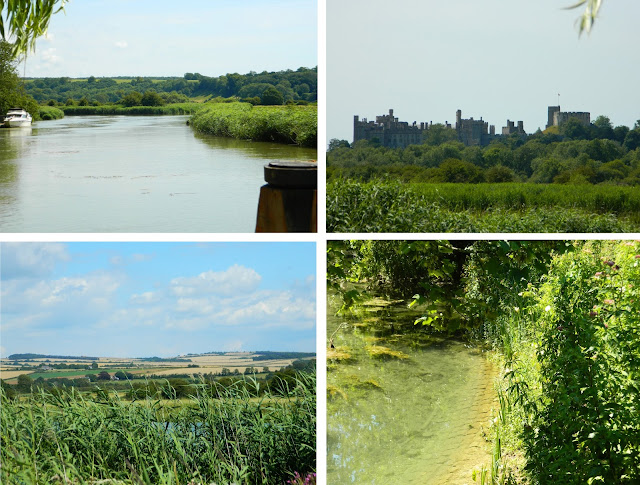 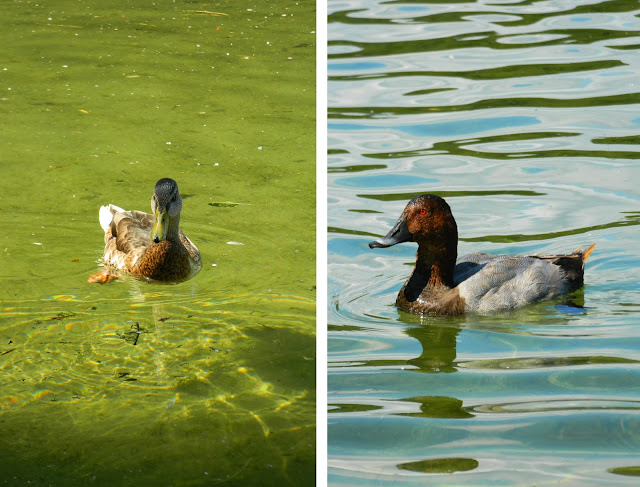 Some duck pics taken from our little rowing boat. We found the duck on the right rather scary looking with it's red eyes! 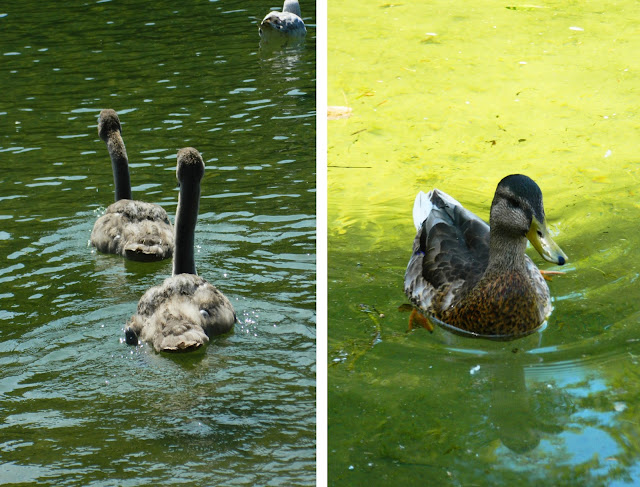 A couple of signets on the boating lake, as well as another duck! 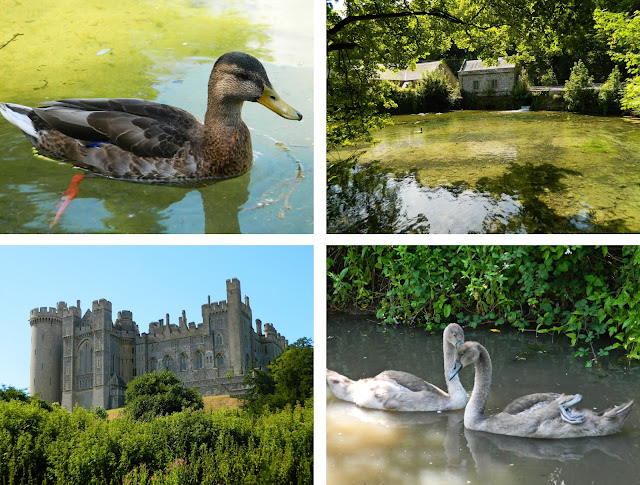 Top left: Another duck from the boating lake and top right: The now closed and abandoned trout farm
Bottom left: A closer view of Arundel Castel and bottom right: A couple of signets that we saw further up the river. 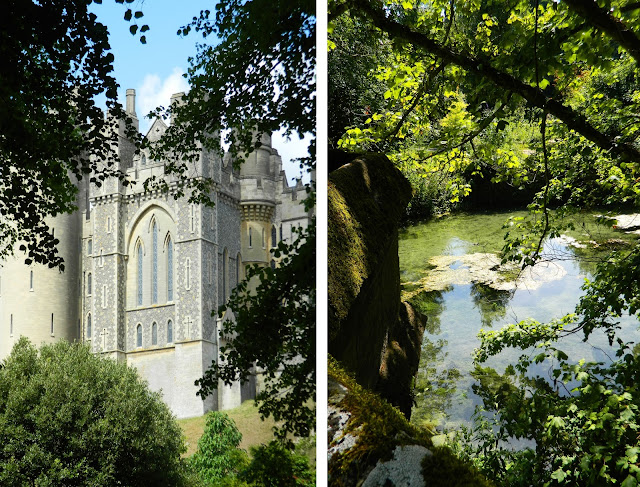 Another view of the castle and river 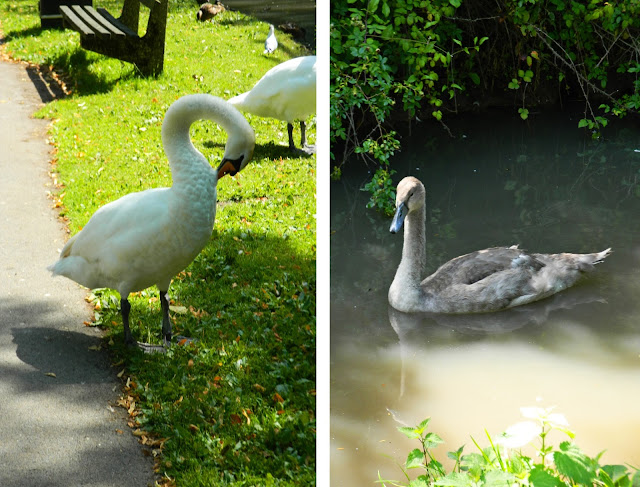 A preening swan up river along with it's signets 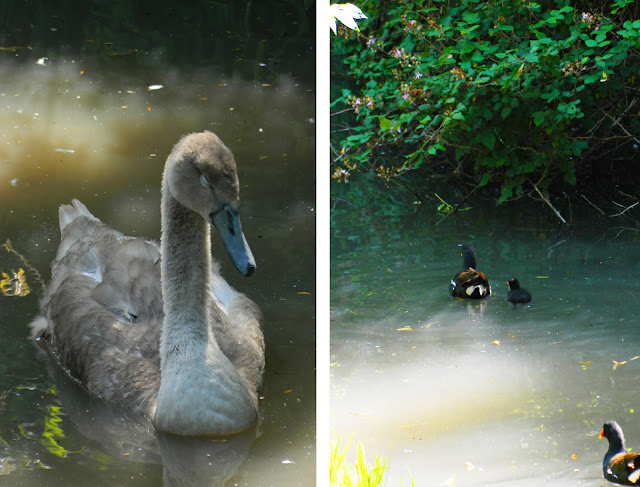 A sleepy little signet, and a Moorhen with her baby

﻿
The day after mum's birthday I had another Hen Do! This time it was for my mother in law, and involved a girls night out drinking and dancing the night away in a reserved area of a pub in Croydon. Everyone was in good spirits, we all thourghly enjoyed ourselves, and the DJ was fab and played lots of old records on turn tables rather than laptops as they usually do these days!

The Stag Do for the same wedding also took place that night in London, which my hubby attended and also thourghly enjoyed. Whilst out he randomly bumped into Richard Winsor who play's Dr Cal in the BBC drama Casualty, and ended up having a chat and his photo taken with him! I have to say that I was rather envious of him as I rather like Dr Cal!

A couple of days after the Hen and Stag Do's we had a Blue Moon, which was the 2nd full moon that we have had in a month. During a blue moon the moon appears larger than usual, so after hearing about it I went out to take a look. Below you can see what I saw. I was quite impressed with this shot considering it was only taken on my bridge camera. 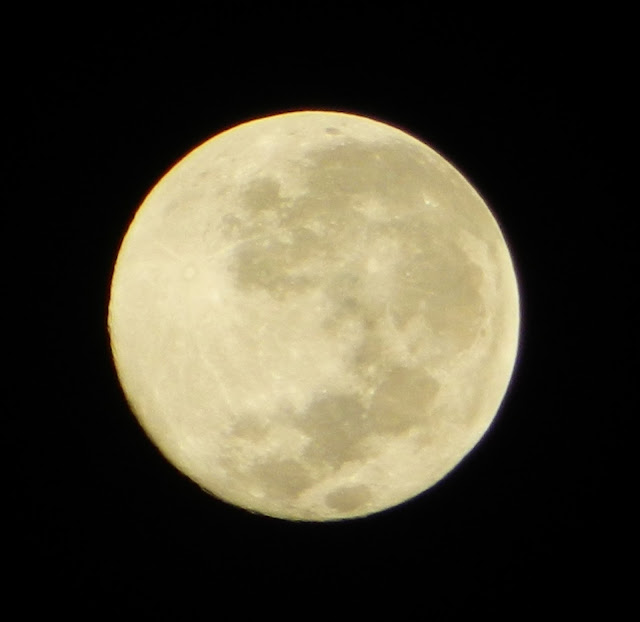 Whilst we are on the subject of space and stargazing, there were also meant to be a number of my meteor showers visable over the past week, but unfortunately and I were unable to see any due to there being too much light pollution or cloud cover which was a shame. It's typical since we have had so much nice weather lately, but over the last couple of days or so the weather has definately turned. We have had a lot of heavy downpours and muggy weather with a bit of thunder thrown into the mix, but that doesn't seemed to have got rid of much of the mugginess which I am not a fan of!

Below you can see a rainbow that I managed to catch on a walk home from work during one of these downpours. 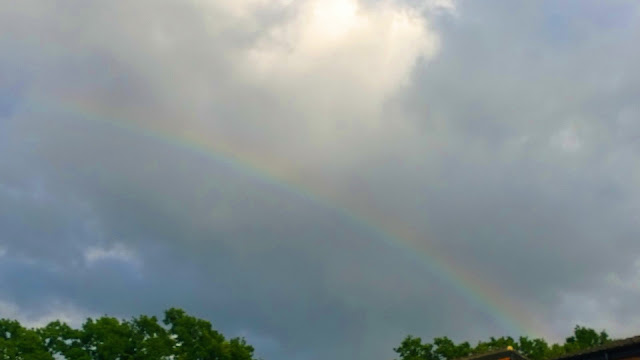 I hope that you are all well and that you had a fab weekend! I worked as usual during the day on Sat, then the hubby and I had a chilled one on Sunday as we were both pretty knackered after a family BBQ in Redhill on Sat night.

It was held a my hubby's step-father's brother house, who sadly passed away after a battle with cancer earlier in the year. He, his wife, and kids used to entertain a lot and would have massive garden party's every summer, but since he got ill this obviously hadn't happened. Due to this it was the first get together that they had had in years, and the first since he passed away. There was a lovely hog roast, and all of the neighbours were there too. Everyone enjoyed themselves and there was lots of fun and laughter. They were also incredibly lucky with the weather as we had torrential rain again once again throughout the previous day. Everyone was saying that it was Alan that had made the weather nice, and that he was looking down on us all.

Below is a pic of the gorgeous sunset that we had whilst at the BBQ. If you look closely in the distance you can see that the garden overlooks the Surrey Hills. 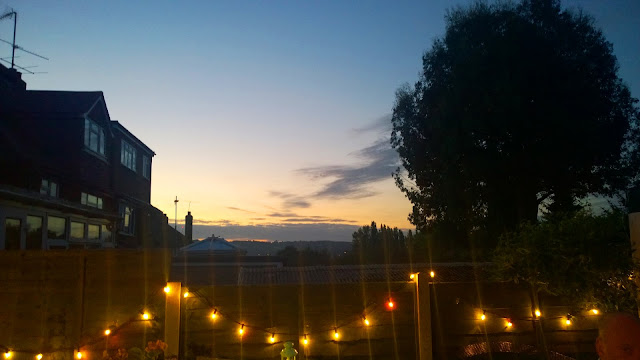 Thanks again for bearing with what has been another long post, and for visiting. I am hoping to start blogging more frequently again in the near future, as well as picking up with my Bobby Bunny work very soon. The work on our new place is getting there now, and my craft room is taking shape! Have a good week! x
﻿
Posted by Jenny at 20:47 No comments: