So since I last blogged summer seems to have finally arrived and we seem to have hit into a heat wave, which first appeared around mid July and during which time we had a week where temperatures that were in the low 30's here! To those of you that do not live in the UK that may not sound particularly warm, but for us it is pretty much unheard of!

In truth I'm not a big fan of the heat and getting all hot and bothered in the humidity that we tend to get here, plus the sun doesn't tend to like me much either as I tend to burn very easily! But nether the less it has been nice to have some brighter and drier days, which I think makes everyone feel a little cheerier!

On one of the first weekends that we had the nicer weather we had a family day over at the hubby's dad's, which was lovely as a lot of that side of the family we have barely seen since Christmas! It was nice to have a catch-up with everyone and chill out and enjoy the sunshine, and my father-in-law put on a lovely spread of food as always! It also meant that I got to see my gorgeous new niece for the second time, who is now 5 months old and just so adorable, as well as our other nephews, plus step niece and nephew.

Whilst there they roped the hubby and I into taking them for a walk through the fields to go Pokemon hunting! I can't say that I have bought into this "Pokemon Go" craze and I was a little concerned that we were going to end up getting lost with 5 kids in tow as we didn't know where we were going, but thankfully we managed to go and find the Pokemon and get back without getting lost or losing any of the kids in the process!

I have to say though that as much as I haven't bought into the game myself, it was lovely to see the kids running through the fields and all playing so nicely together! 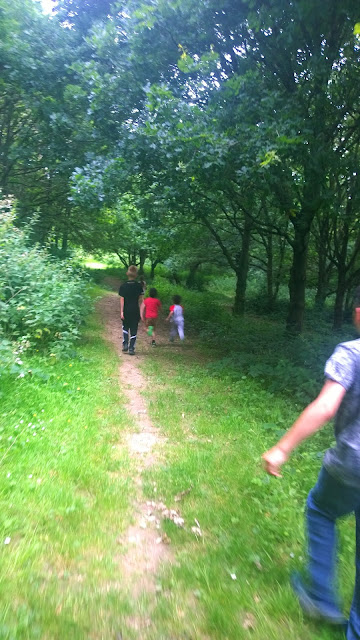 The following week I then continued to enjoy and make the most of the sunshine by spending my day off meeting up with my mum and going for breakfast at a local garden centre that has a lovely little cafe, where we got to sit outside and I enjoyed a very yummy granola sundae! I then went for a little walk in the countryside again to make the most of the sunshine! I was hoping to spot some bunnies, but as I suspected it was far too warm for them to be out! On my way home though I ended up walking through town where I spied something bunnified in the form of a gorgeous bunny purse that I naughtily found and bought in the Joules sale! Technically they are hare's but I thought that they looked pretty bunny like in this instance! I absolutely love it and am so glad that I bought it even though I shouldn't have done! I also spied a gorgeous little outfit for my niece whilst I was there too! Again I shouldn't have bought it, but I just couldn't resist! Below you can see my yummy granola sundae as well as my naughty buys! 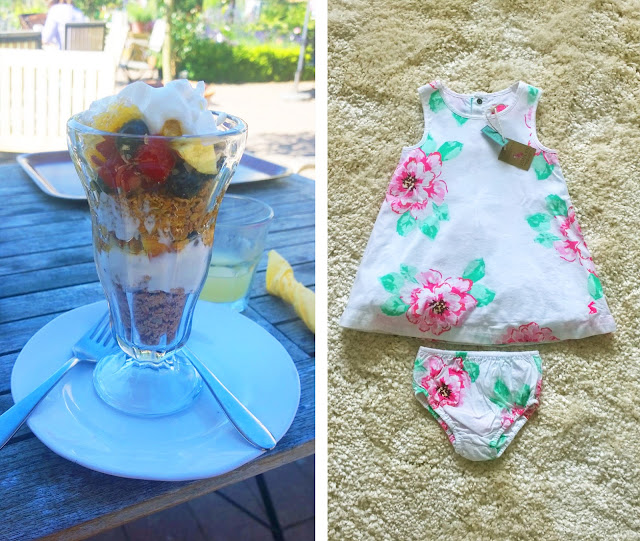 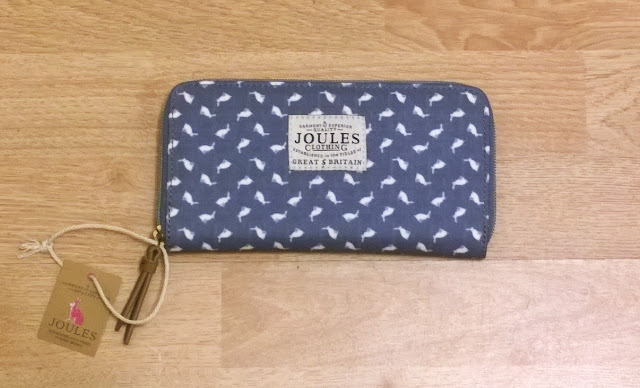 Moving on towards the end of July the hubby and I spent a sat evening pup sitting my sister-in-laws gorgeous Blue British Bulldog Ralph who I mentioned a few posts back, as they were going out for the evening and he doesn't like to be left alone.

Now Ralph is a much loved pup who is my sister-in-laws baby and she has been at home looking after and training him pretty much since they got him, which was just before Easter. The only problem with that is that the poor little pup has been getting separation anxiety now that she had tried to start leaving him. So they have been trialling leaving him for short amount of time with things to distract him, one occasion being the previous weekend whilst we were at her dads. Whilst there she had an app on her phone with a camera that was linked up so that she could see him, but he just cried and cried so they ended up going back to him. They will try to ease him into it gradually as obviously there are going to be times when they can't be with him, but it's going to take some work! Hence us dog sitting!

Now I have always been an animal lover, but I have never been a massive dog fan as a general rule. But I have to say that little Ralph just melted both mine and my hubby's hearts and is just so adorable! He was also so well behaved when we looked after him, even though he did know that something was different and that his mummy wasn't there! He didn't bark but rather squeaked and was very playful. He generally sleeps a lot too, but as knew that something was different when we were there he kept getting up and down from his bed, and when he did sleep it was with one eye open so that he could see what was going on! Below you can see some of the pics that I took of him!

Just look at his little face, isn't he adorable!

So moving on again to the weekend before last which a very busy one for us!

Firstly we had my sister's boyfriends 30th birthday on the Friday evening, which went on until the early hours. This was then followed by an afternoon tea on sat for my mum's 50th which we celebrated with my sister, Nan, aunty, and some of her girly friends, before attending my sister-in-laws Dr's & Nurse's themed graduation party that evening to celebrate her graduating as a nurse, which again went on until the early hours. Then on the Sunday we celebrated mum's actual 50th by going out for a lovely meal to celebrate with the family, before having cake and going for a country walk. Needless to say we had a fab time at all, but we were knackered by the end of it! Below you can see some pics of the weekend! 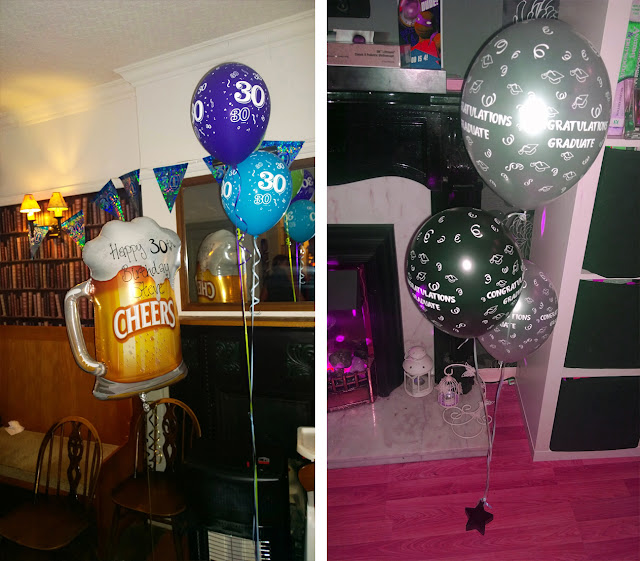 One of my sister-in-laws graduation cakes left, and the cake that I got and iced for her right. 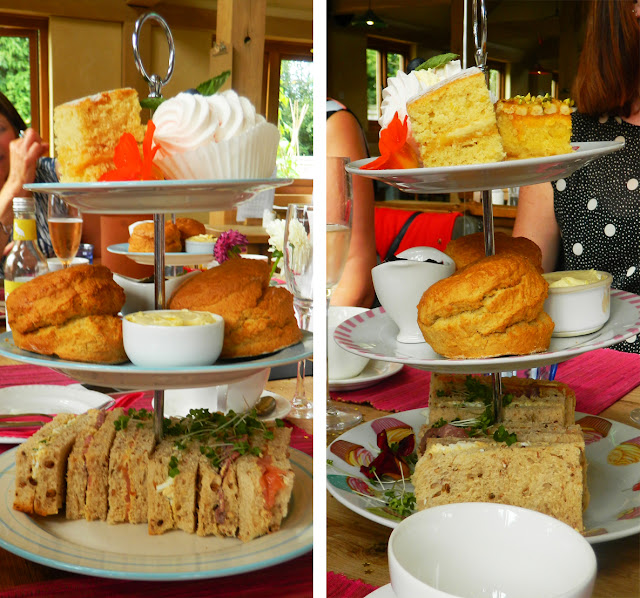 The beautifully presented afternoon teas and the gorgeous selection of handmade sandwiches, cakes, and scones that were just divine! 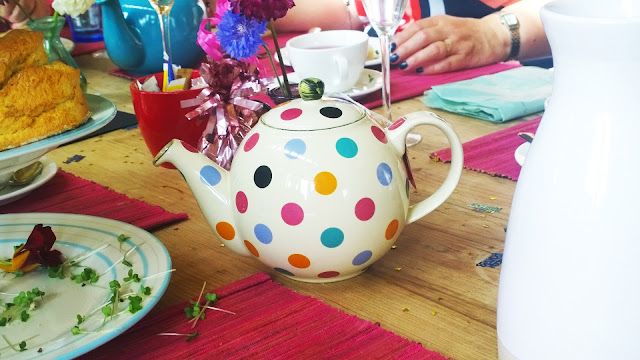 A pretty little teapot that we were served with that I rather took a liking too!

The pretty allotments outside the window of where we had the afternoon tea!

The beautiful flowers that mum got given by friends as well as many other presents!

The lovely roast that we then had for Sunday lunch, as well as the yummy dessert that I had after! We also gave mum her present from my sister and I whilst at the meal which was a pair of tickets to see the railway children in London, which she was very surprised about and there were tears for! As well as a Pandora charm to go on her bracelet with her birthstone on. We don't normally go so mad for birthday's but it was a special birthday and mum does a lot for us so we felt that she deserved it! 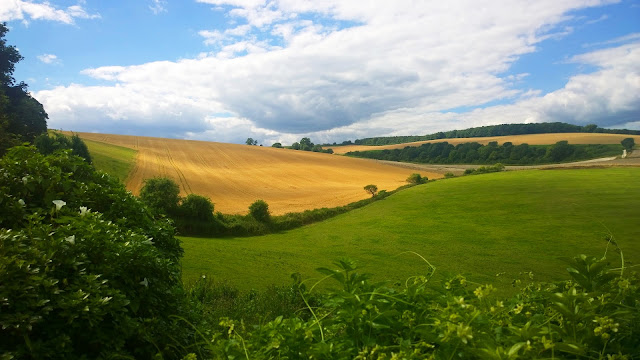 The view over the south downs from the garden of the pub that we had our roast at. 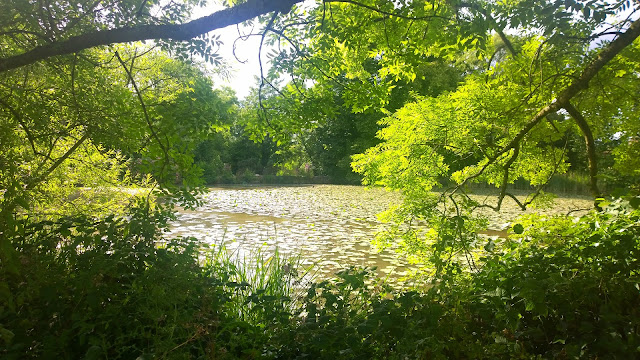 A rather large pond that was situated along the country walk that we went for after our lunch once back home, which is only about a ten minute walk from my parent house. There was also a bridge along the way where we stopped to play pooh sticks! 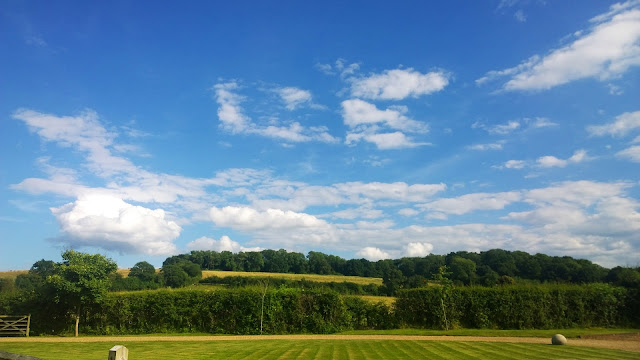 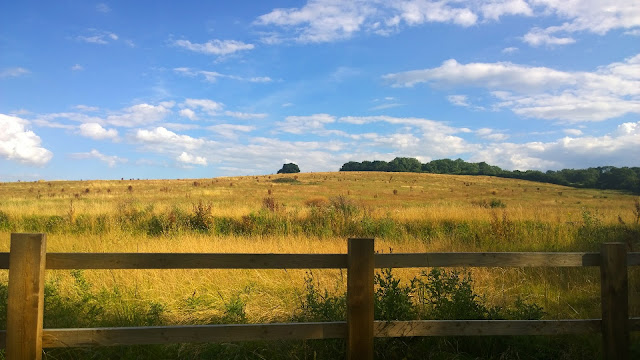 Some more pics from our walk

Above left mum with her engagement ring on for the first time in over ten years, after dad got it repaired for her as a 50th birthday present from him. Above right the birthday cake that I again aced for mum birthday.

So that brings us up to this weekend just gone, which apart from me working as usual on sat was a pretty quiet one after last  weekend! The hubby and I just made the most of chilling out, going for a little jaunt into town as the weather was lovely once again, enjoying good food, and catching up on TV!

Apart from this not much else has been going on other than the usual day to day things! My retail job is now coming into its busiest period of the year now that the schools are off, which I always dread as it gets very stressful and means that I don't have as much time to focus on my illustrating due to the extra hours required. But we are getting there with only three and a half weeks until they go back, even though the worst is still to come! I have still been getting my card orders done though and have had some more lovely feedback on them over the last few weeks or so, which is always lovely to receive!

I hope that I find you all well and that if you are in the UK that you are all enjoying the summer whilst it lasts! I also hope that you are having a good week and thanks for visiting as always! x
Posted by Jenny at 11:43 No comments: