A Gig and Bunny Things!

Hello everyone! I hope that you have all had a good few weeks!

Things have been relatively quiet here which I am quite happy with to be honest! Work in my retail job is  ticking along but is rather quiet and mundane at the moment, and so far the dawn of a new month doesn't seem to have cheered the weather up much as you can see below! Due to this I have quite enjoyed hibernating and pottering about at home when I have had the chance! 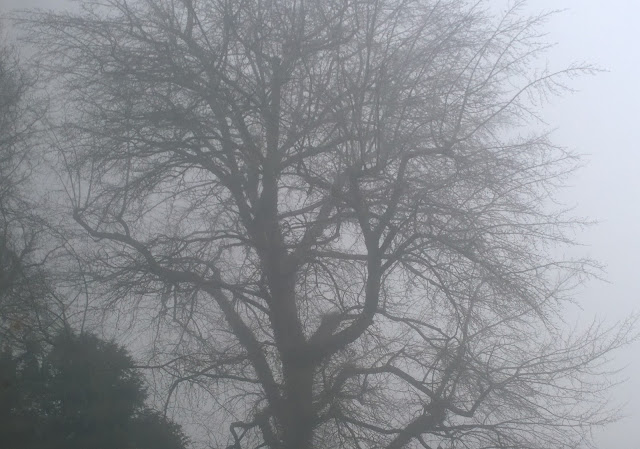 There has been a little activity here and there though!

A couple of weekends back we spent a lovely evening visiting one of my childhood friends and his wife in their lovely new home along with a few other friends. They cooked a lovely meal for us and it was great to have a catch up with them all, as it had been a fair while since we had all been free to meet up.

On the same day an opportunity also came up for me to go to a gig at the O2 London the following day, as one of my Download friends had a spare ticket going. It was a bit spontaneous, but it was for a couple of bands that we had seen at Download Festival before and that I rather liked. I had considered getting tickets at the time but didn't get around to it so I thought why not I don't do things like that very often, plus I didn't have work the next day either! Anyway I am soo glad that I went as we had an amazing time! The supporting act that I didn't know well were good, the next band was fab, and the main act were amazing! The crowd were also a lovely bunch as were the security team. Getting back after was a bit of a nightmare as the train timetables had changed from the morning meaning that there were no trains for me to get home until the following morning, but we had half expected this being that it was a Sunday and with the way that Southern rail trains are at the moment! So I ended up crashing at my friends for the night and she dropped me off the next morning. My hubby would have picked me up from hers but it was about was about 1:00am by the time that we got back, plus it was also extremely foggy and icy! So much so that when she dropped me off the next day it was still foggy and icy come 11:00am!

Below you can see a few pics from the night.

Last weekend was then spent with me going down to see my Nan with my mum on the sat as I had the day off, and my hubby went to take one of his nephews to his first football match along with his stepdad and one of his brothers.

Sunday was then a chilled one as the weather was pretty wet and horrible so I decided to spend the afternoon sketching little Florrie, which I really enjoyed doing as it has been a fair few years since I drew anything life like. Below you can see the result, which I am pretty happy with considering that I am rather out of practice. 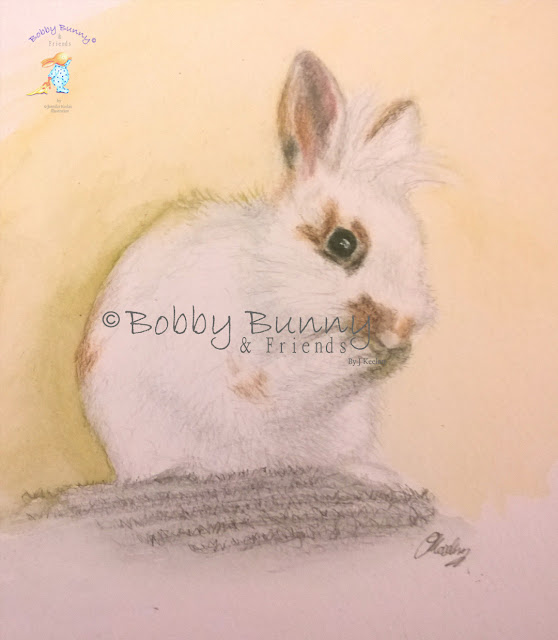 This weekend just gone was just filled with me working on sat, before having a girls night out to catch-up with best friend who has just got back from her honeymoon. Needless to say after partying until the early hours of Sunday morning, yesterday was a quiet pj day filled with chick flicks.

On the Florrie front the little monkey is just that, but we wouldn't change her! She is still more often than not being difficult to get out of the hutch and def knows her own mind as one minute she won't come out and the next she will, so things are on her terms in that department at the moment the little madam! As I mentioned in my last post though she loves coming to say hello and be stroked, and has a right old time binkying and being very playful on "her" sofa once she is out. My cushions now have more holes in before, as does the throw that has now officially been adopted by her. She has also established "her" seat on the sofa which so happens to be where my hubby sits, so if he is not there she will be straight there and if he moves she will be straight there too! She has also grown back her fluffy bum which is all tufty, plus is now weighing in at 1.5kg! To be honest though that isn't really surprising being that when I went back to where we got her from the other day for hay supplies I saw that they still had one of her sisters there and she is now huge! They had also changed the sign from "Netherland Dwarfs" to "Netherland Dwarf Mixed Breeds", as she too is clearly not a Netherland Dwarf!

Florrie has also decided that there is something that she hates more that the hoover too, which randomly is me doing my workout DVD! I did it for the first time since having her the other day and she spent the whole hour stamping her feet! I thought that it may have been where I was jumping about as she is more than used to having music on and it doesn't bother her at all, so I tried covering one half of her hutch up so that she could shelter more but it didn't make any difference until I turned it off! Today she was much better with it, but we still got a few stamps! Strange bunny! The only other time we have stamps, squeaks or grunts are when she is having a tantrum about me not giving her food stick quick enough rather than her being scared!

Below you can see Florrie with her sister just before we got her below left, and just how big her sister is now right and below! 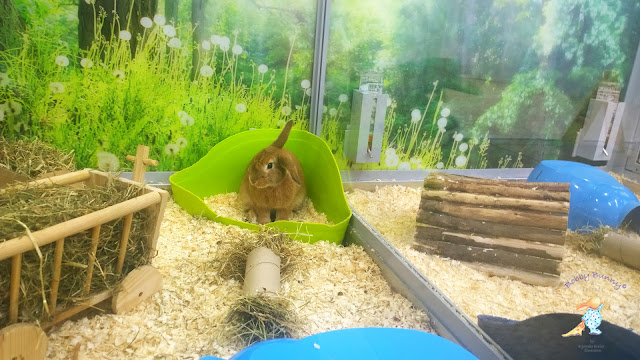 We do love our little bunny though as you may have gathered, so much so that I found myself waking up in a panic the other night as I thought that we had left her out. I woke my hubby up in the process and even when he told me that we hadn't I still had to check in my half asleep state! What am I turning into! I feel like more of a parent now that I did when I had Milly & Molly, which I think is due to her being a single bunny and a house bunny. Talking of which madam had her first vaccinations this afternoon! I was a little apprehensive about taking her as I didn't know how she would react, or whether she would have any side effects being that she had never been to the vets before. I also have never had a bunny vaccinated before as it wasn't really about a much when I had my last bunnies, and you had to have ten people wanting it in the area at a time to have it done then as it's a live vaccine.

She was however pretty well behaved! I took her in her cardboard box that she came is I thought that it would be easier to get her out from than a carrier. She was understandably pretty scared when we got there and was covering in the corner, but a bit of dandelion mix bought her out of her shell. Once out of the box she had a full check over and was weighed before having her vaccine. She kept trying to climb up off of the table onto me for safety, and at one point jumped so high that she nearly jumped over my shoulder. But when it came to having the actual vaccine she was soo good and didn't even flinch!

Since being home she seems to have settled down very quickly and has been munching and letting me stroke her still, so I think that I am forgiven! I will keep an eye on her, but hopefully she won't have any side effects!

Below you can see a few pics of our little monkey from the last few weeks. 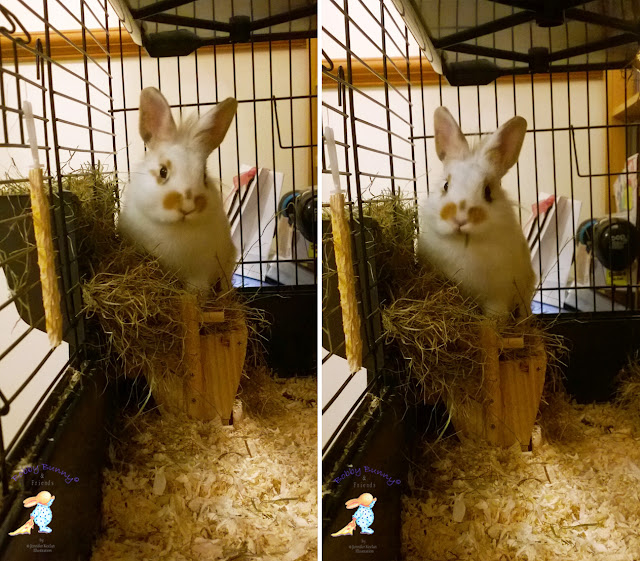 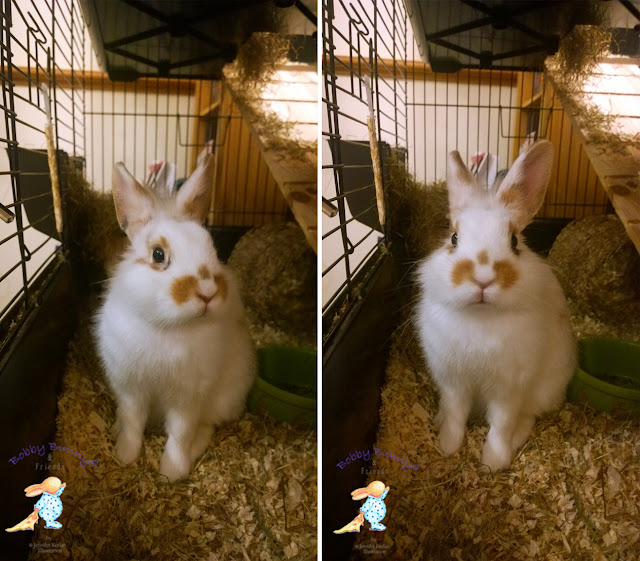 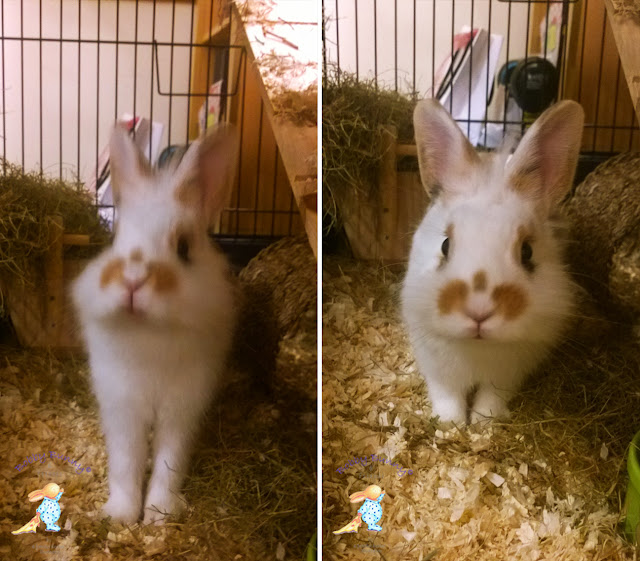 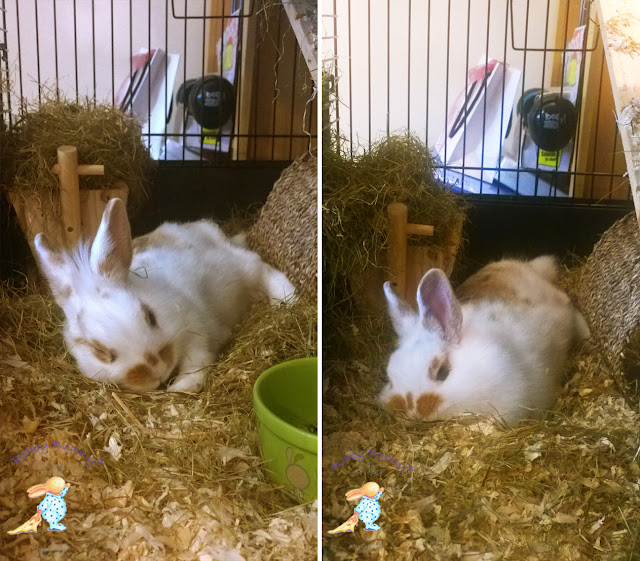 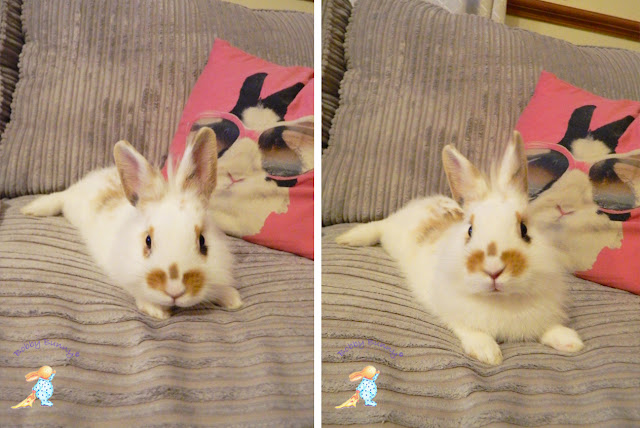 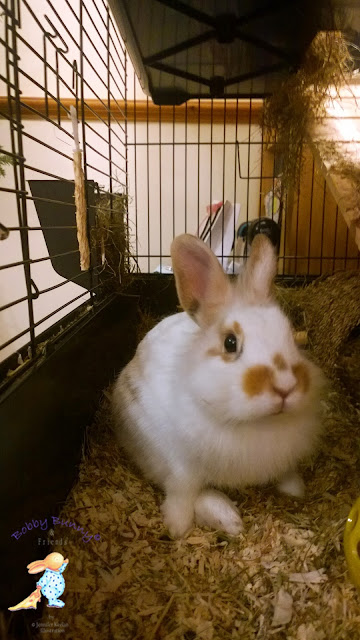 In other bunny related news I have a few new bunny related items that I have added to my collection in the last few weeks or so. Firstly a rather lovely bunny cushion, which my mum treated me to on a trip to one of our local garden centres the other week. You can see it below, plus I hasten to add that this one will be staying away from Florriekins! 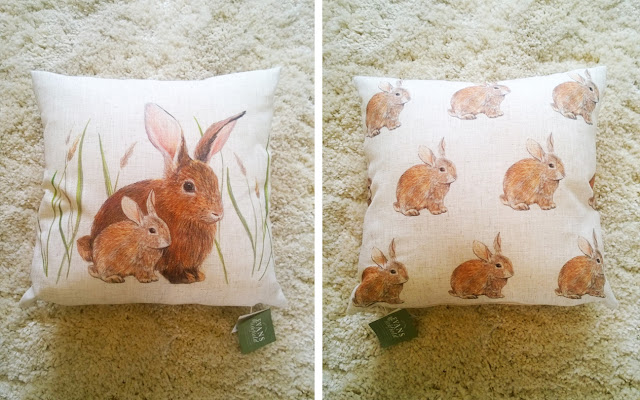 Then secondly I was so very excited to have my rose gold and dusty pink Olivia Burton bunny watch turn up on Friday, which I have been on the waiting list for months! I have to say that I am not a big watch fan and haven't worn a watch since I was about twelve, but I just couldn't resist this one when I saw it. It's soo gorgeous as you can see below and even nicer in the flesh! 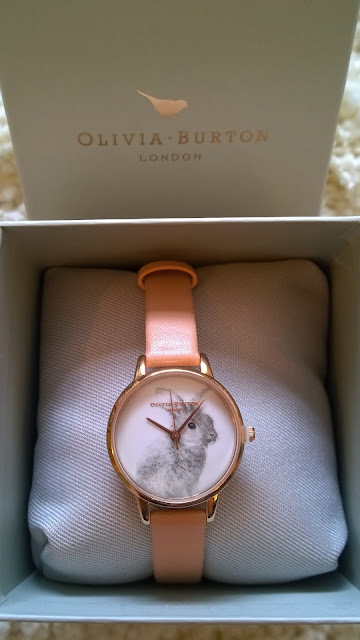 Also in Bobby related news I have also sketched out a new design which should be finished and ready to show you by my next post!

I hope that you all had a fab weekend, and thanks as always for visiting!  x
Posted by Jenny at 16:51 1 comment: