I thought that I should get round to posting the card mock up of my New Baby Boy design that I showed you a couple of posts back. So here it is: 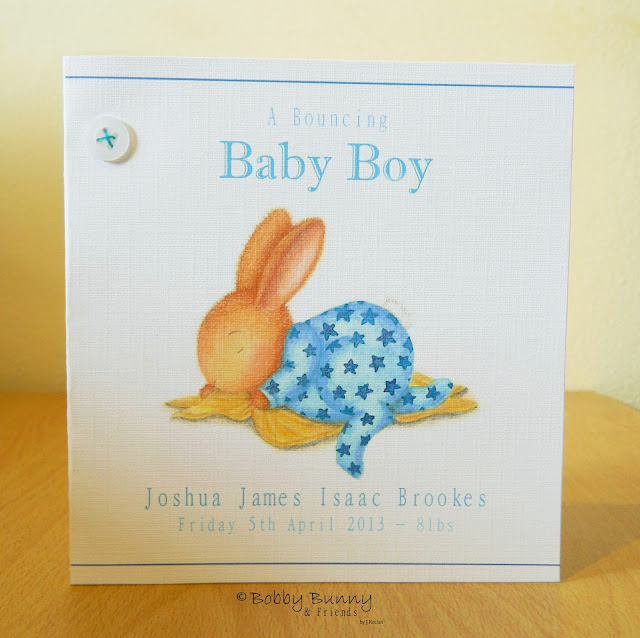 We met up with the new parents of baby Joshua last weekend and had a catch up and lots of cuddles with the gorgeous little man, which I have to say made me more than a little broody! They loved the card design and prezzies that we bought them, which consisted of: A Jellycat ellie rattle ring, a Gisela Graham "cute as a button" photo holder, and a lovely Olly & Belle muslin cloth; which I chose because it had blue star's on it to match Bobby's baby grow. I also found an Emma Bridgewater "Starry Skies" gift box to put it all in, again to keep with the star theme.

I have to say that I am glad that they liked the card, as I am  pretty pleased with it too. It's the first time that I have mocked up a card and felt that it is exactly the way that I would like the range to look. It took a lot of fiddling around with fonts, colours and sizes to get the look and feel that I wanted on the finished card, but I got there in the end.

I don't know if you have noticed the little sewn button detail, but this was a little addition that I made to the design after I had given the card to Joshua's parents. The version that I gave them had little sparkly star stickers on it, as I felt that I needed something to finish the design. But even though I liked the design that I gave them, I still didn't feel that it looked quite right. So I started thinking what else I could use to enhance the design, but not over power the image. I tried a bow, but thought that it was a bit girly, and other baby related items such as bottle stickers etc, were to over powering and distracting against the image. Then inspired by the "the cute as a button" gift that we gave Joshua I thought buttons! I was originally going to use blue ones, but the pearl looked more subtle. Then I was going to glue them but thought that sewing them with a coordinating thread might look better & so it did! Ta dah the design was done.

Like my movie themed wedding card design featured in my Happy Easter post. This card is printed onto 250gm canvas effect card and measures 13x13.5cm.

I hope that you have all had a good week and for those of you that are in the UK, I hope that you are enjoying the long Bank Holiday weekend. The weather has been lovely here all week, which worked out nicely as I was off work. I was intending to clear out my spare room/studio and get lots of drawing done, but it was just too nice to stay indoors. So I spent most of the week catching up with friends and spending time in the park with them and their children.

Hopefully the weather is being kind to you too and enjoy the rest of the weekend! I'm back to work tomorrow, but after having the week off I can't really complain about working on a Bank Holiday. x
Posted by Jenny at 11:03