Not the Best Start To the New Year!

Hello everyone, I hope that you’re well! Sorry that I've been rather distant for some time again lately! Once again I was hoping to have had my illustration back up and running by now, but due to demands of having a small child, a part-time job, and life just generally flying by, I haven’t really had the opportunity of late! Plus we also had our little ones Christening and 1st Birthday to organise towards the end of last year, which then led us into the Christmas celebrations.

On top of that we haven’t had the best start to 2020, as I spent most of Jan quite ill with a horrible cough and chest infection which all stemmed from a Christmas cold, but ended up getting so bad that I literally had no energy to even pick up our little one, was wheezing, and couldn’t walk anywhere without having a massive coughing fit. It got very wearing, especially when I ended up setting off issues that I’ve had with my sciatic nerve for years. However thankfully it has now finally all passed! I’m just hoping that I can stay healthy for a bit now; as I think that I’ve gone about two weeks without a cough or cold since the end of Oct. Most of which I think is down to our little one still feeding and taking a lot of my immunity, as I’ve definitely been more susceptible to coughs especially since being pregnant with her, but on the plus side though she’s been absolutely the fine.

Unfortunately the same cannot be said for our little Florrie bunny though, as just over three weeks ago she stopped eating and drinking one evening. Now this does happen occasionally as I’ve mentioned in the past, and it does usually co-inside with a moult cycle (which she was heavily doing at the time.) We’ve never been sure why and neither are the vets, but we have definitely noticed a pattern there though. Normally at this point I give her tummy rubs etc to help kick-start her eating again, but this time when I got her out I could feel a big hard plum like lump behind her right front leg, which had literally appeared from nowhere! I had thought when I put her out for her run a few days earlier that I had perhaps felt something different, but on investigation I couldn’t feel anything so didn’t really think much of it at the time. Obviously this time though I freaked out, not only because of the lump and not knowing what it was or where it had come from, but also because I didn’t know if she wasn’t eating because of one of her moult “off days” or because of the lump. My instinct said that it was probably because of the moult and at that point the priority was to get her eating again, rather than stressing her and making her worse by taking her to the vets.

Thankfully this was the right decision and after a very worrying night I managed to get her to start drinking again after 12 hours, and eating a few bits of fresh food after 16. Then by the end of the next day she was fully back to herself, and eating, drinking, pooping and peeing as normal. I did however find another smaller and less smooth bump on her just above the last one and more towards the top of her leg/towards the side of her neck on this day. So again I panicked, and as she was now eating and drinking the emphasis was now on finding out what these lumps may be. I was worried sick and took her for an emergency appointment at the vets the day after. Obviously I was goggling away in the meantime to see what it could be, but in my heart of hearts I knew that it probably wasn’t going to be great news.

The vet confirmed that they did indeed feel odd, that they weren’t that uniform, and that the rate that they had come up was not good. He also said that on the positive that they felt like they weren’t in deep tissue, but he thought that he could feel another tiny lump behind her front leg on the other side too. However he couldn’t definitively say what they may be one way or another without doing a Fine Needle Aspiration, which involved taking three samples of the cells to be sent off for testing.

Florrie was so very good for this and barely flinched as they did it, but after having discussions with the vet as to the potential outcomes I understandably came away from the appointment pretty upset. We decided that if it was bad news that we wouldn’t go down the route of surgery as not only would the antithetic risks be high, and the removal of three lumps be too much for her. But at least one of the lumps was also around her lymph node area, meaning the chances are that would be that it would already be in her system, or that the lumps would re-occur. So instead we decided that if it was bad all the time that she was happy and eating we would go down the route of palliative care, and then pain management when it got to that point. Then again if it was good news then we would still leave the lumps alone all the time that she was happy and they weren’t appearing to bother her.

After an agonizing weeks wait, (during which time Florrie was back to her happy hyper self) I got a call with the results. Basically they came back showing fatty cell division, which in itself isn’t necessarily a bad thing as fatty lumps she can live with, but it doesn’t mean that the lumps aren’t covering an underlying problem. There is also a possibility that they could be sarcomas, which as much as I don’t want them to be I would say that from my research since would be more likely. Then the third theory of the vet is that it could be A-typical Myxomatosis, (which is a rare strain of Myxomatosis that vaccinated bunnies can get.) Where they present with lumps from the disease, but it isn’t life threatening, and the lumps recede in time. Which although would be the better of the two latter possibilities right now, I am thinking is less likely.

Ultimately though we wouldn’t know for sure unless they biopsied and fully removed all of the lumps, which as I explained before with all things weighed up, isn’t a route that we would want to risk putting her through, and the vet is also in agreement with too. Plus the idea of losing her under anaesthetic, in a stressful environment that she doesn’t know, and without us, isn’t how I would want her to go if the worst was to happen. So for now the course of action is just to monitor her and the lumps, see how she goes. The vet is also very interested in her case as it’s out of the ordinary so is going to keep monitoring her too, and will re-check her soon when her jabs are due.

It’s now been three and a half weeks since I found the lumps and took Flo to the vets and touch-wood so far she’s been completely herself, eating, drinking, and pooing fine, and even though it’s hard to tell when I’m checking them so often there doesn’t seem to be any change in the lumps, or anymore. She also doesn’t appear to be any pain or discomfort, which I know is classically something that bunnies hide, but I like to think that I know her well enough that I know when she’s not right. But like I say as it is she’s fine in herself, and  if I didn’t know that the lumps were there I wouldn’t know that there was potentially anything wrong. All I can do is hope that we stay on this track for as long as possible, hope and pray that it’s nothing bad, and cherish every moment that we have with her.

It’s all happened so out of the blue and so fast that it feels quite surreal, but I’d be devastated to lose her so young. She’s not even quite three and a half yet, and is such a lovely soul with so much life in her. I was also hoping that our one year old would be able to grow-up with her too, as she already loves her, feeds her, and says hello to “Flo,Flo, so she’s definitely notice if she was gone too. But we’re not going to give up on her, and will continue to give her the best life that we can.

Below you can see our happy little Flo and I in a pic that I caught of us on the off-chance last week, and as you can see she's still happy to give kisses! I don't usually post pics of myself, but these moments of use together seem even more precious to capture now. 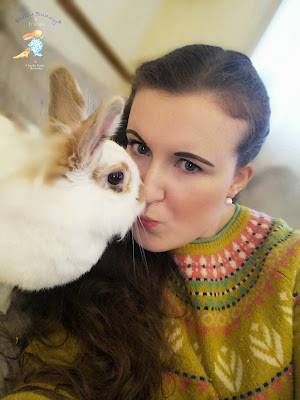 Sorry that this hasn’t been a happier post, but as you’ve all followed Flo’s journey with us from the beginning I wanted to keep you updated. I hope that you have all had a better start to the New Year than us though, and as always thank you for popping by! I am planning on popping by with a few throwback posts of photos from Christmas and before over the next few weeks, and am also working on getting my illustration back up and running as we speak! X
Posted by Jenny at 14:58

Email ThisBlogThis!Share to TwitterShare to FacebookShare to Pinterest
Labels: Every Day Life, Florrie